James N. Green, Director of the Brazil Initiative, comments on a bill pending in Brazil's National Congress that would go as far as to bar the use of "gender" in teaching, saying "with the election of Bolsonaro and a more conservative Congress, there is a possibility the bill might get traction."

Jair Bolsonaro threatens us all (written by Stephen Kinzer)

Senior Fellow Stephen Kinzer in The Boston Globe, "In one way, though, Bolsonaro is scarier than any of those other political thugs. He is not only a provocateur who thrives by turning people against each other, but also a product of the darkest period in modern Latin American history."

James N. Green, Director of the Brazil Initiative, sat down with Democracy Now! to discuss what President-elect Jair Bolsonaro means for the future of Brazil.  "...the Bolsonaro government... is probably going to be implementing a series of extremely reactionary changes to the country..."

Brazil may elect Jair Bolsonaro. Here's why a major democracy is flirting with fascism. (comments by James N. Green)

Brazil Initiative's Director, James N. Green, comments on the possibility of Jair Bolsonaro, the right-wing candidate, winning Brazil's presidency. “The goal of Bolsonaro is to overturn every single victory social movements have achieved since the return to democracy and every single victory workers have won over the last 80 years."

James N. Green, Director of the Brazil Initiative, on the upcoming presidential election in Brazil, "Should Bolsonaro win the popular vote at the end of October, he will have the backing of a conservative majority in the Congress to carry out his far-right agenda. Should the left manage to flip the projected outcome and elect Haddad to the presidency, it will undoubtedly be a weak government."

It's time to start worrying about the most crucial election in Brazilian history (comments by James N. Green)

Director of the Brazil Initiative, James N. Green, offered commentary on the upcoming presidential election in Brazil, saying "This is the most crucial election in the history of Brazil...Brazil can go in two different directions now."

James N. Green, director of the Brazil Initiative, offered commentary on Brazilian presidential candidate Jair Bolsonaro, saying “Bolsonaro is much more of a wild card than Trump is."

What will it take to restore Rio's National Museum to its former glory? (written by James N. Green)

James N. Green, Director of the Brazil Initiative, in California Today, "The absence of minimal fire safety and security measures and the lack of disaster preparedness reflect a blatant disregard for the Brazilian nations crucial cultural and scholarly resources." 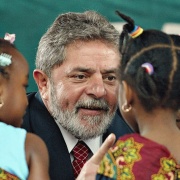 Former President Lula da Silva has been ordered to surrended himself to authorities and will be serving twelve years in prison. He was convicted on charges of corruption and money laundering. The decision raised questions about judicial impartiality in the context of the extemly polarized political landscape of the country, with critics arguing that his impriosement was politically motivated. Lula was running for a third term as a President of Brazil.

Brazilians in Rio are mourning the death of Marielle Franco, an Afro-Brazilian advocate who worked as a councilwoman of the city. A graduate of Brazilian public universities, Franco had become known for openly denouncing police brutality against the predomintantly black population of Rio's favelas. She was assasinated by an unindentified gunman after attending a forum addressing precisely this topic.

"Brazil’s president has ordered the military to take control of public security in the state. It is the first federal intervention in a state since Brazil’s return to democracy in the 1980s, and it is seen by some as a bid by the president Michel Temer, to improve his favorability ratings rather than as a measure to tackle crime.The decree signed by Mr. Temer falls short of a full intervention in the state government. While the military will take control of security, Gov. Luiz Fernando Pezão will continue to run the state government of Rio de Janeiro."  "The decree confers broad authority on the military to restore order. It also places police forces, which have had shortages of personnel and equipment, under the command of a general, Walter Souza Braga Netto, who oversees military operations in the eastern part of the country." Source: NYT.

In response to a Brazilian samba school’s use of blackface in a Carnival parade, James N. Green, director of the Brazil Initiative, said it made sense that there would be confusion over how to interpret blackface in Brazil, since it originated outside the country.