Marina Silva -Opportunities and Challenges For Sustainable Development in Brazil 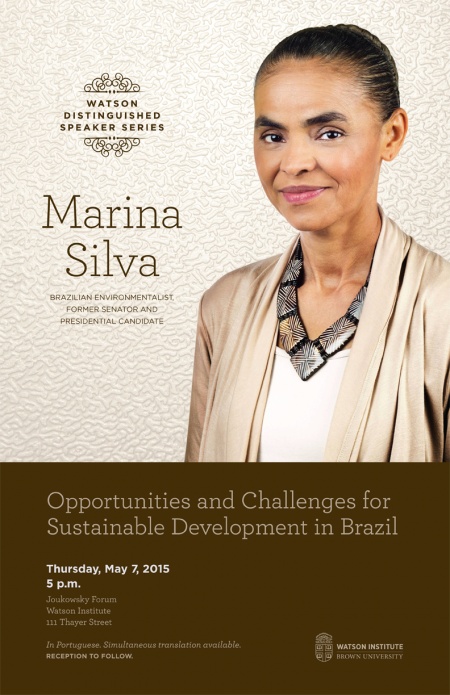 During almost 30 years of public life, Maria Osmarina Marina Silva Vaz de Lima has served as senator, environment minister, and two-time presidential candidate. She has received worldwide recognition for her defense of political principles and values, the Amazon rainforest, and sustainable development. He awards are numerous, and include Doctor Honoris Causa from the Chinese Academy of Forestry in 2005; the 2007 United Nations’ Champions of the Earth Award; the World Wildlife Federation’s Duke of Edinburgh Conservation Medal in 2007 for her outstanding leadership in creating the Amazon Regional Protected Areas program; the 2009 Sophie Prize for her battle to conserve the Amazon forest; and the 2009 Prince Albert II of Monaco’s Climate Change and Energy Award for her exemplary action in support of environment and sustainable development.

In addition, Silva is a member of the UN’s Millennium Development Goals Advocacy Group, and was one of eight flag bearers at the opening ceremony of the 2012 Summer Games in London. She received the title of Honorary Member of the International Union for Conservation of Nature at the World Conservation Congress in Korea, and was presented with the Distinguished Service in the Hemisphere award at the 2013 Bravo Business Awards for her ongoing commitment to environmental causes. The Financial Times magazine named her on of their "Women of 2014."