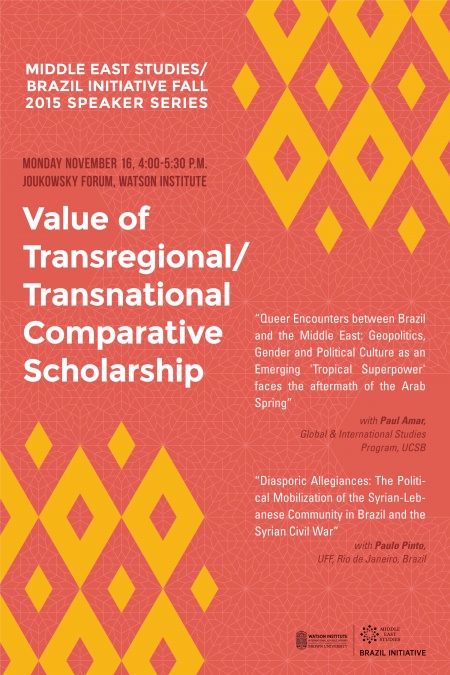 Paul Amar, Associate Professor, Global & International Studies Program, University of California, SantaBarbara, and Paulo Pinto, Director of the Center for Middle East Studies at the Fluminense Federal University, Niteroi, Brazil, will be speaking on the “Value of Transregional / Transnational Comparative Scholarship.”  Why does work that crosses between the Middle East and Latin America (specifically Brazil)  raise questions and develop methods that are uniquely productive and illuminating? Amar and Pinto will focus on how they began to develop this network in Rio in 2003 and how it has developed, as well as speaking to their specific fields of anthropology, political science and global studies.

Paul Amar will present  on “Queer Encounters between Brazil and the Middle East: Geopolitics, Gender and Political Culture as an Emerging ‘Tropical Superpower’ faces the aftermath of the Arab Spring.”

Paulo Pinto will present  on “Diasporic Allegiances, the Political Mobilization of the Syrian-Lebanese Community in Brazil and the Syrian Civil War.”

Paulo Pinto will speak on the Syrian-Lebanese presence in Brazil, created by several waves of immigration, which started in the late nineteenth century and continued, albeit in much reduced numbers, until today. The Syrian immigrants and their descendants usually tried to connect their identities to larger Arab nationalistic frameworks, creating and affiliating themselves to Syrian-Lebanese and/or Arab institutions, rather than simply Syrian ones. However, the ongoing civil war in Syria has triggered an unprecedented political mobilization of this population, including the generations born and raised in Brazil, around specific Syrian issues. While one would expect that communities who experienced a transition to democracy thirty years ago would support the Syrian uprising, most of Syrian diasporic organizations in Brazil and Argentina have shown an unconditional support to the Ba‘thist regime. Based on ethnographic fieldwork on religious and ethnic associations, interviews with diaspora leaders and organizations’ members, as well as on the organizations’ material and history, our paper aims to understand the political positioning of the Syria-Lebanese immigrants and their descendants in Brazil, as well as to unveil how Bashar el Assad’s government has tried to capitalize this support as some sort of transnational political capital in order to strengthen his position both inside Syria and in the international arena.