The Working Group on Comparative Slavery, Slaves and the Law: Comparative Questions and Approaches 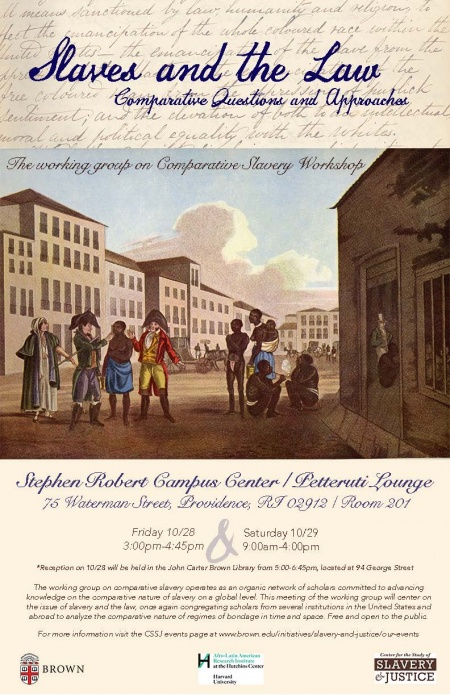 The working group on comparative slavery was set up by Prof. Alejandro de la Fuente from Harvard University in 2015. It operates as an organic network of scholars committed to advancing knowledge on the comparative nature of slavery on a global level. It draws on scholars from several universities in New England, particularly those in the greater Boston area such as Harvard University, Brown University, Boston University, and MIT. The first meeting of the group took place at Harvard in October 2015 under the auspice of the Afro Latin American Research Institute, bringing together scholars from Europe, Africa, Latin America and the United States, to discuss "new trends in the historiography of the Transatlantic Slave Trade." The second meeting of the working group will happen at Brown University on October 28-29 under the auspices of the Center for the Study of Slavery and Justice (CSSJ) and the Afro Latin American Research Institute from Harvard University. This meeting will center on the issue of slavery and the law, once again congregating scholars from several institutions in the United States and abroad to analyze the comparative nature of regimes of bondage in time and space. The meeting will consist of three panels, and we expect to welcome approximately twelve scholars to Brown University. We hope that the meeting will pave the way for further scholarly collaboration, production, and dissemination of knowledge on slavery. The strategic goal of the meeting is to establish the CSSJ as one of the key venues to catalyze scholarship on the global ramifications of slavery.