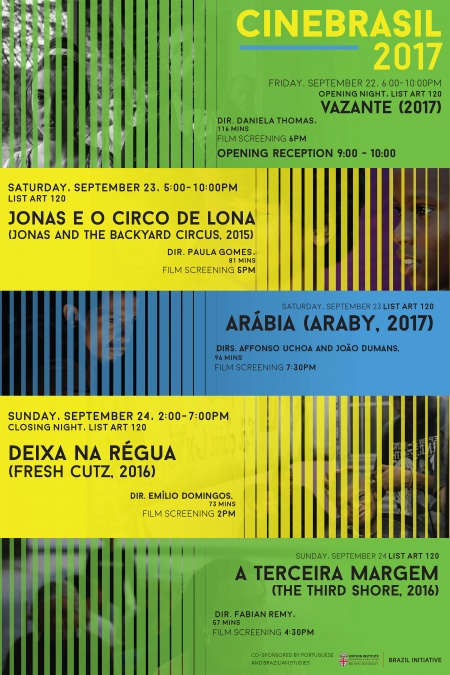 CineBrasil is an annual film festival that highlights some of the best works in recent Brazilian cinema. CineBrasil this year will include documentaries and feature length films of great artistic quality, some of which are virtually unknown outside of Brazil and touch on subjects such as race and gender, childhood and adolescence, hairstyling culture and indigenous history. See full schedule below. Admittance for the festival is on a first-come, first-serve basis. Please arrive on time, even a bit early to secure seating. Note that though many trailers do not have English subtitles, all of the films will be subtitled.  Co-sponsored by Portuguese and Brazilian Studies.

In a crumbling farm in the Brazilian backlands, a farmer finds his wife has died in childbirth and marries his 12-year-old niece. Set in the Diamantina Mountains in 1821, the film tells the forbidding tale of race and gender at the nation's birth.

Born in a traveling circus but living in the sprawling city of Salvador, Jonas tries his best to keep the big tent going in his small backyard.

In an old aluminum factory, a teenager finds the diary of a worker killed in an accident, a window into the last decade of his life.

While shooting in the suburbs of Rio, director Emílio Domingos noticed the importance of hairstyling for the contenders in dance battles. Here he documents the intersections of identity, aesthetics and music as they emerge from a fresh haircut.

In the mid-1940s a boy named João went out to gather hay and was taken by the Caiapós and raised by them. Four decades later, a young man named Thini-á-Fulni-ô left his village and struck out for Brasília. These are their stories.