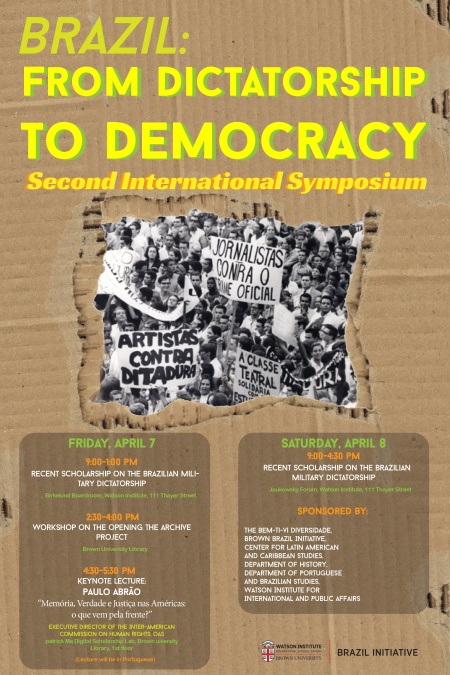 Marking the fifty-third anniversary of the 1964 Brazilian military coup d’état, the Second International Symposium at Brown, “Brazil: From Dictatorship to Democracy,” will bring together junior and senior scholars from Brazil, Europe, and the United States to discuss new research on the Brazilian dictatorship. At the same time, we will evaluate the progress of the Opening the Archives Project, which has scanned, digitized, and made available on an open-access Brown Library website 30,000 U.S. government documents from the State Department, Defense Department and the Kennedy, Johnson, Nixon, Ford, Carter, Nixon, and Reagan Presidential Libraries.

9:00-9:30         Opening of the International Symposium and Digital Scholarship Workshop

9:30-11:00       Panel No. 1 Student Panel on Recent Scholarship Related to the Brazilian Military Dictatorship and Opening the Archives Project

"The Path to Civilian Rule"

“Opening the Archives: From Coup to Coup”

“Brazil will Build”: Measuring American Influence on the Major Development Projects of the Brazilian Military Dictatorship”

11:15-12:45     Panel No. 2 on Recent Scholarship Related to the Brazilian Military Dictatorship and Opening the Archives Project

“Entering the Intimacy of an Allied Army: the Brazilian Military Biographic Files of the US Department of State (1950-1970)”

“The Perception of the Brazilian Public Opinion on John F. Kennedy and the Alliance for Progress in Cold War Brazil (1961-63)”

Paulo Abrão, former President of the Brazilian Amnesty Commission and Executive Director of the Inter-American Commission on Human Rights of the Organization of American States

“Real Self-help”: The Lyndon B. Johnson Administration, the Alliance for Progress, and the Early Years of Military Rule in Brazil, 1964-1967.

“A Family Affair: Youth, Sexuality, and TFP in the Era of Dictatorship.”

"The Participation of Brazilian Jews in the Struggle Against the Brazilian Military Regime, 1964-1985"

“From economic compensation to psychosocial care and reparation: connecting to the never-ending military police victims”