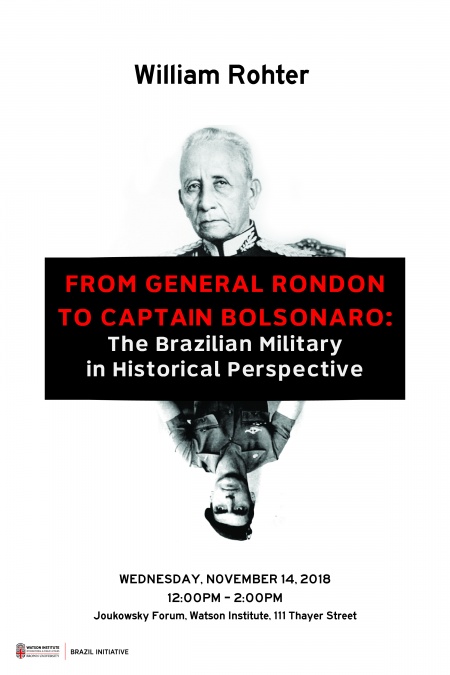 Bolsonaro's victory marks the third time in Brazilian history that a military officer has been elected president, but Bolsonaro is cut from a very different cloth both from his predecessors and from current members of the officer corps. In many ways, in fact, he is the polar opposite of the historical figure who the Brazilian military most reveres and idealizes, Gen. Candido Rondon, a soldier, scientist and statesman who lived from 1865 to 1958 and played a central role in constructing modern Brazil. This talk will offer an historical perspective on Bolsonaro's rise and suggest what kind of constraints from and resistance within the military that he may face in his efforts to turn Brazil rightward.

Larry Rohter was a correspondent in Brazil for 14 years, first for Newsweek magazine, from 1977 through 1982, and later, between 1998 and 2008, for The New York Times; in between he also worked as a correspondent in China, the Philippines, Japan, Mexico and Central America. In addition, he covered the 2008 American presidential election campaign for the Times and worked as a culture reporter and critic there for several years. Born and raised in Chicago, Rohter is a graduate of the Georgetown University School of Foreign Service, where he majored in history, politics and economics; he also has a master's degree from Columbia University's School of International Affairs, where he studied Modern Chinese History and Politics. He is the author of three books about Brazil, the most recent of which is a biography of the explorer, scientist and statesman Candido Rondon, to be published early next year.