CineBrasil ─ Discussion with Babenco: Tell Me When I Die director Bárbara Paz 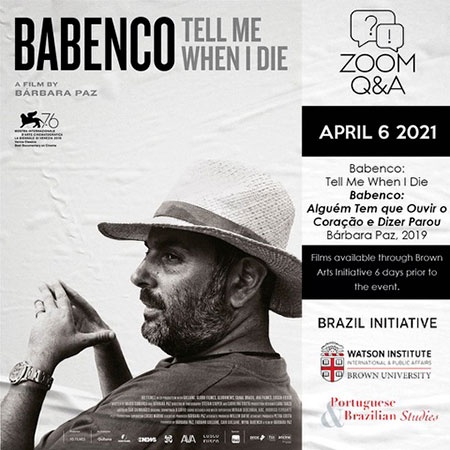 Barbara Paz is a critically acclaimed, award winning Brazilian actress, producer and director. In her acting career she has performed in over 25 plays by a wide range of playwrights, from Oscar Wilde to Tennessee Williams. She is also a hugely popular television star under permanent contract to TV Globo. In 2013 the Ministry of Culture awarded her the highly prestigious Medalha do Cavalheiro - Knight's Medal, in recognition of her outstanding work. As a director and producer she has worked on many television programmes and shorts among which are Conversa com Ele - Conversation with Him (2019) and Ato - The Act (2020). In 2019 Barbara published the book Mr Babenco, and its success inspired her to go on to make her first feature-length documentary BABENCO - TELL ME WHEN I DIE. It was first shown at the 2019 Venice Film Festival where it won Best Documentary in the official Venice Classics competition. At MIFF 2020 (Mumbai, India) it also won Best Documentary, and won the same prize again at FICVINA 2020.

“I have already lived my death and now all that is left is to make a film about it.” So said the filmmaker Hector Babenco to Bárbara Paz when he realized he did not have much time left. She accepted the challenge to fulfill the last wish of her late partner: to be the main protagonist in his own death.

In this tender immersion into the life of one of the greatest filmmakers from South America, Babenco himself consciously bares his soul in intimate and painful situations. He expresses fears and anxieties, and also memories, reflections, and fantasies, in this face-off between his intellectual vigor and physical frailty, which were the hallmarks of his career.

From the onset of cancer at the age of 38 until his death at 70, Babenco made of the cinema his medicine and the nourishment that kept him alive. BABENCO – TELL ME WHEN I DIE is Barbara Paz’s first feature film, but is also, in a way, Hector’s last work: a film about filming so never to die.

The film is available on Eventive through Tuesday, April 6th at 5 pm EDT.

This event is supported by the Brazil Initiative, Portuguese and Brazilian Studies, The Watson Institute, and the Brown Arts Initiative.