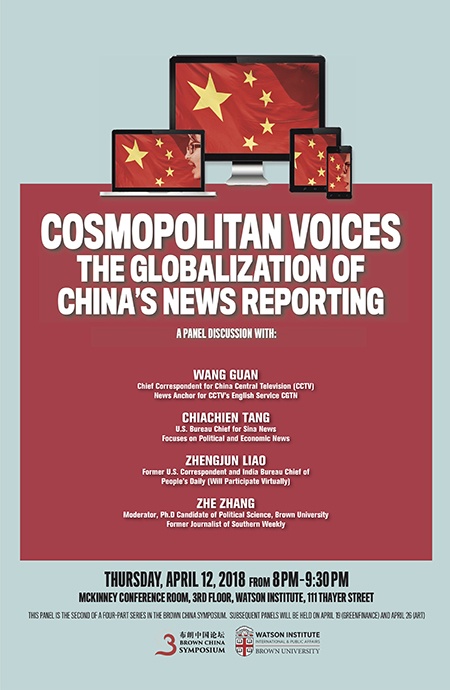 Over the past few years, China’s media industry has started an evolution towards globalization: many of the main media outlets have started establishing oversea bureaus around the globe to bring the freshest perspective to the audience in China. This process of globalization is a novel process for both the journalists, who are working in a completely new environment away from home and the audience back in China who, for the first time, are able to see the news abroad in the most immediate and diverse way. In this panel, we will explore how has each media outlet, such as CCTV (China Central Television), People’s Daily, and Sina changed over the past few years to move towards a more globalized way of news-reporting? How have these efforts changed the Chinese audience’s way of thinking about and seeing the world? Our guest speakers will also share their unique experience as Chinese journalists working in Washington D.C. and reporting news in the White House.

Commentors on the panel will include:

Wang Guan is chief correspondent for China Central Television (CCTV) and news anchor for its English service CGTN. He is currently based in Washington D.C. Wang Guan has been covering major events defining China-U.S. political and economic relations since 2009. Prominent newsmakers he interviewed include Dr. Henry Kissinger, US Secretary of State John Kerry, US National Security Advisors General H.R.McMaster and Susan Rice. He broke stories from over 20 Chinese provinces. He is one of the most followed Chinese reporters on China’s social media. In 2017, He was awarded “Asia 21” Young Leader by Asia Society. Wang Guan graduated from Johns Hopkins University with a master’s degree in Global Policy and a bachelor’s in journalism from Communication University of China.

Chiachieh Tang, is the U.S. Bureau Chief for Sina news where she focuses on political and economic news. She manages the print and film channels for Sina News’s U.S. operations and is in charge of writing feature stories, conducting video interviews, and making documentaries. Tang has previously also worked for Caijing (財經) Caixin Media (財新) in Beijing, Taiwan, New York, and Washington DC. Chiachieh is committed to providing her audience with unique stories covered from angles that appeal to a younger generation. She’s been in D.C. for four years and has interviewed Michelle Obama, Jack Lew, Alice Rivlin, and numerous others, but her favorite interviews have always been those that reveal real insights into American society, including at a homeless shelter, at a gun store, and at a Trump rally in southwestern Virginia.

Zhengjun Liao, (will participate virtually) Former US Correspondent and India Bureau Chief of People's Daily, Graduated Tsinghua University’s School of Journalism and Communication PhD program, Liao was the U.S. Bureau Chief People’s Daily is the biggest newspaper group in China and is the official newspaper of the Chinese Communist Party.

Zhe Zhang, moderator, is the former reporter at Nanfang Daily and a current Ph.D. student of International Relations at Brown University.

This panel is the second of a four-part series in the Brown China Symposium.  Subsequent panels will be held on:

April 26 - Art and Design: Practice and Vision of the Chinese Culture

The Brown China Symposium (BCS) is organized by a group of Brown students who want to bring conversations on modern China to the Brown community through accessible lectures, forums, and discussions. The mission of BCS is to build a bridge between China and Brown through education and conversation.