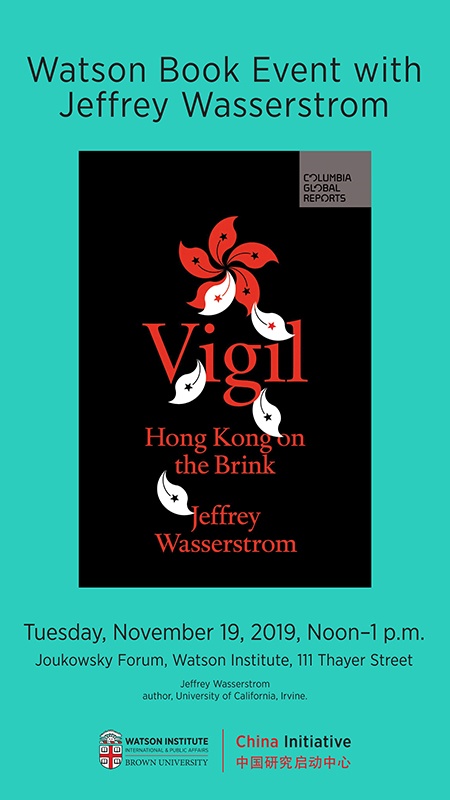 The rise of Hong Kong is the story of a miraculous post-War boom, when Chinese refugees flocked to a small British colony, and, in less than fifty years, transformed it into one of the great financial centers of the world. The unraveling of Hong Kong, on the other hand, shatters the grand illusion of China ever having the intention of allowing democratic norms to take root inside its borders. Hong Kong’s people were subjects of the British Empire for more than a hundred years, and now seem destined to remain the subordinates of today’s greatest rising power.

But although we are witnessing the death of Hong Kong as we know it, this is also the story of the biggest challenge to China’s authoritarianism in 30 years. A small group of activists, who are passionately committed to defending the special qualities of a home they love, are fighting against Beijing’s crafty efforts to bring the city into its fold—of making it a centerpiece of its “Greater Bay Area” megalopolis.

Jeffrey Wasserstrom, one of America’s leading China specialists, draws on his many visits to the city, and knowledge of the history of repression and resistance, to help us understand the deep roots and the broad significance of the events we see unfolding day by day in Hong Kong. The result is a riveting tale of tragedy but also heroism—one of the great David-versus-Goliath battles of our time, pitting determined street protesters against the intransigence of Xi Jinping, the most ambitious leader of China since the days of Mao.

Jeffrey Wasserstrom is Chancellor’s Professor of History at the University of California, Irvine, where he also holds courtesy appointment in Law and Literary Journalism. He is the author of five previous books, including China in the 21st Century: What Everyone Needs to Know (co-authored by Maura Elizabeth Cunningham) and Eight Juxtapositions: China through Imperfect Analogies from Mark Twain to Manchukuo. He is an adviser to the Hong Kong International Literary Festival and a former member of the Board of Directors of the National Committee on U.S.-China Relations. Follow him on Twitter at @jwassers.