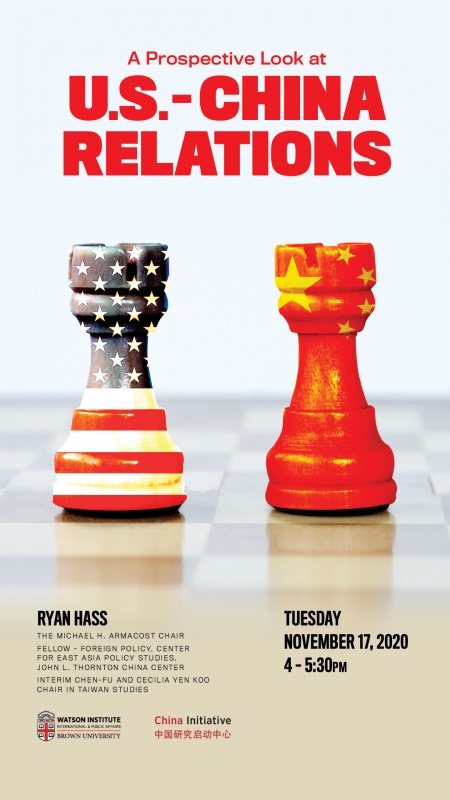 Ryan Hass will examine the causes of the current downturn in U.S.-China relations and how the current downturn compares with previous ones. He also will discuss key trends in the U.S.-China relationship and likely future trajectories for the world’s most consequential bilateral relationship. He will discuss the potential impacts of the U.S. election outcome on the future of the relationship. Hass also will share a few anecdotes from his participation in meetings with American and Chinese leaders to illustrate the broader themes of the talk.

Ryan Hass is a fellow and the Michael H. Armacost Chair in the Foreign Policy program at Brookings, where he holds a joint appointment to the John L. Thornton China Center and the Center for East Asia Policy Studies. He was part of the inaugural class of David M. Rubenstein fellows at Brookings. He is also a nonresident affiliated fellow in the Paul Tsai China Center at Yale Law School. Hass focuses his research and analysis on enhancing policy development on the pressing political, economic, and security challenges facing the United States in East Asia.

From 2013 to 2017, Hass served as the director for China, Taiwan and Mongolia at the National Security Council (NSC) staff. In that role, he advised President Obama and senior White House officials on all aspects of U.S. policy toward China, Taiwan, and Mongolia, and coordinated the implementation of U.S. policy toward this region among U.S. government departments and agencies. He joined President Obama’s state visit delegations in Beijing and Washington respectively in 2014 and 2015, and the president’s delegation to Hangzhou, China, for the G-20 in 2016, and to Lima, Peru, for the Asia-Pacific Economic Cooperation (APEC) Leaders Meetings in 2016.

Prior to joining NSC, Hass served as a Foreign Service Officer in U.S. Embassy Beijing, where he earned the State Department Director General’s award for impact and originality in reporting, an award given annually to the officer whose reporting had the greatest impact on the formulation of U.S. foreign policy. Hass also served in Embassy Seoul and Embassy Ulaanbaatar, and domestically in the State Department Offices of Taiwan Coordination and Korean Affairs. Hass received multiple Superior Honor and Meritorious Honor commendations during his 15-year tenure in the Foreign Service.

Hass was born and raised in Washington state. He graduated from the University of Washington and attended the Johns Hopkins School of Advanced International Studies prior to joining the State Department.