Rising Tensions in the Taiwan Straits: Will the Chinese Civil War End with a Bang or a Whimper? 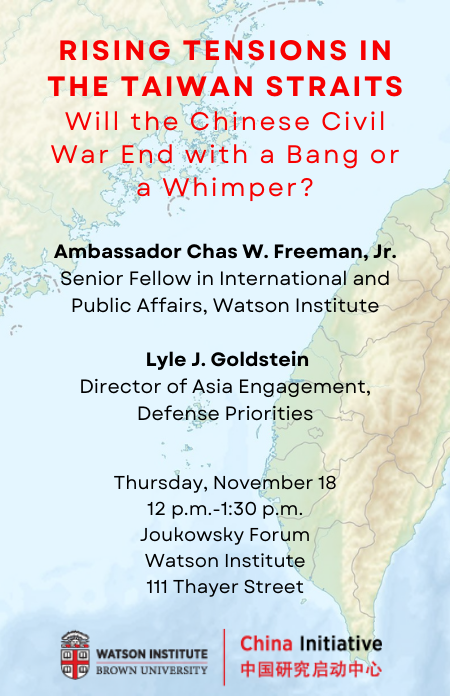 Join Watson Senior Fellow Chas Freeman and Lyle Goldstein, director of Asia engagement at Defense Priorities, for a discussion of the rising tensions in the Taiwan Strait.

Lyle J. Goldstein is Director of Asia Engagement at Defense Priorities. Formerly, he served as Research Professor at U.S. Naval War College for 20 years. In that post, he was awarded the Superior Civilian Service Medal for founding and leading the China Maritime Studies Institute (CMSI). His main areas of expertise include both maritime security and nuclear security issues. Major focus areas have also recently included the Arctic, as well as the Korean Peninsula. He has published seven books on Chinese strategy, including Meeting China Halfway (Georgetown UP, 2015). He speaks both Chinese and Russian and is currently writing a book on China-Russia relations. He has a PhD from Princeton, an MA from Johns Hopkins SAIS, and a BA from Harvard.