DingDing Chen — The US - China Relationship in a New Era: Challenges and Opportunities (starts 11:00am EST) 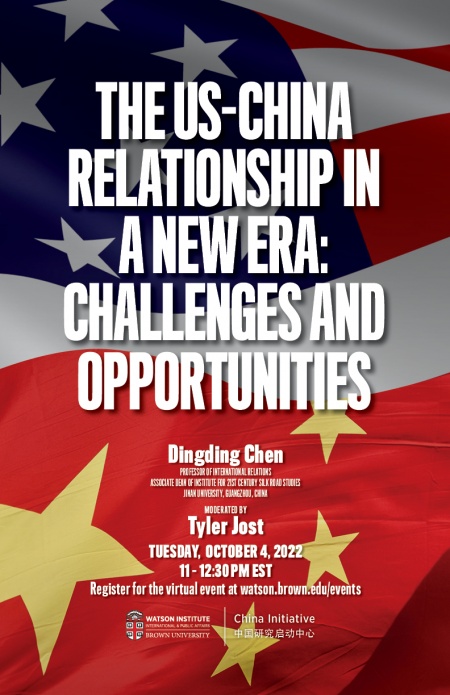 Register here to join the webinar

Dingding Chen is Professor of International Relations, Associate Dean of Institute for 21st Century Silk Road Studies at Jinan University, Guangzhou, China, and Non-Resident Fellow at the Global Public Policy Institute (GPPi) Berlin, Germany, Vice-President of International Studies Association (Asia Pacific region 2014-2018). He is also the Founding President of Intellisia Institute, a newly established independent think tank focusing on international affairs in China. His research interests include Chinese foreign policy, Asian security, Chinese politics, and human rights. His articles have appeared in International Studies Quarterly, International Security, Journal of Contemporary China, Chinese Journal of International Politics, and The Washington Quarterly. He is the co-editor of a book on international engagement with human rights in China. Before teaching at university of Macau between 2009 and 2016, he was a visiting instructor in the government department at Dartmouth College and was also a China and the World Program Fellow at Harvard University. He holds a bachelor’s degree in international economics from the Renmin University of China and a master’s degree and PhD in political science from the University of Chicago.