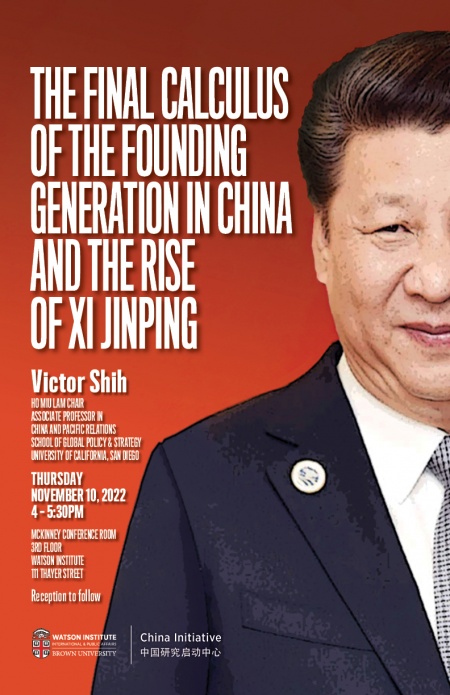 This talk will first discuss strategies dictators use to minimize the chance of an elite coup against them. Although elite politics in China in the 1980s was characterized by power sharing, rehabilitated veterans did not want internal challenges to their spheres of influence. Thus, instead of favoring officials slightly younger than them or well-connected princelings, they opted to promote a large number of politically unconnected technocrats to senior positions. Meanwhile, princelings faced resistance to their promotion, especially those who sought positions in Beijing. The result of this decentralized "coalition of the weak" strategy was that by the 2000s, few princelings were still in the running for top positions. Those who were left could draw on their vast networks of princelings, especially princelings in the PLA, in their competition with less-connected technocrats. This created the structural conditions for Xi's complete domination of the party soon after taking power.

Victor C. Shih is Ho Miu Lam Chair Associate Professor in China and Pacific Relations at the School of Global Policy and Strategy at the University of California, San Diego specializing in China. He is the author of a book published by the Cambridge University Press entitled Factions and Finance in China: Elite Conflict and Inflation and also a new book Coalitions of the Weak: Elite Politics in China from Mao’s Stratagem to the Rise of Xi. He is also the editor of Economic Shocks and Authoritarian Stability: Duration, Institutions and Financial Conditions, published by the University of Michigan Press. This book uses comparative cases to explore how authoritarian regimes respond to economic crises. He is further the author of numerous articles appearing in academic and business journals, including The American Political Science Review, Comparative Political Studies, Journal of Politics, and The Wall Street Journal. Shih served as principal in The Carlyle Group’s global market strategy group and continues to advise the financial community on China related issues. Shih graduated summa cum laude at George Washington University and received his Ph.D. in government from Harvard University. He is currently working on several papers using quantitative data to analyze the Chinese political elite and China’s defense industry.