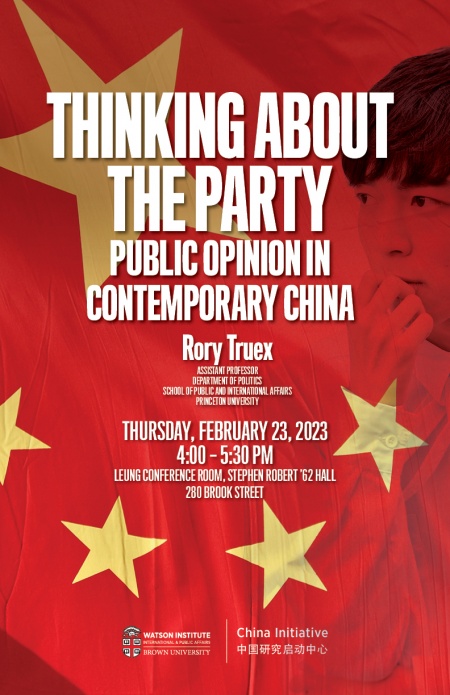 What do we know about how Chinese citizens think about the CCP regime? Can we learn anything from public opinion data in contemporary China, given concerns about self-censorship? The talk will present findings from a series of papers that utilize new methods for measuring political attitudes in China.

Rory Truex is an Assistant Professor in Princeton's Department of Politics and Princeton's School of Public and International Affairs. His research focuses on Chinese politics and theories of authoritarian rule. His book Making Autocracy Work: Representation and Responsiveness in Modern China investigates the nature of representation in authoritarian systems, specifically the politics surrounding China's National People's Congress (NPC). He argues that the Chinese Communist Party (CCP) is engineering a system of “representation within bounds” in the NPC, fostering information revelation but silencing political activism. Original data on deputy backgrounds and behaviors is used to explore the nature of representation, policymaking, and incentives in this constrained system. He is currently working on a new set of projects on repression, human rights, and dissent in contemporary China. His research has been published in the American Political Science Review, Journal of Politics, Journal of Conflict Resolution, Comparative Political Studies, China Quarterly, among other journals.