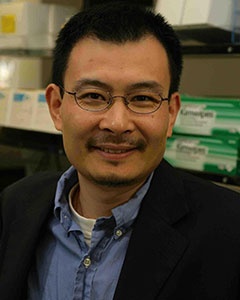 Dr. Liu is an epidemiologist whose work unites molecular genetics, nutrition, clinical medicine, and public health. Dr. Liu is Professor of Epidemiology at the School of Public Health, Professor of Medicine (Endocrinology) and Professor of Surgery at the Alpert School of Medicine. He also serves as director of the Center for Global Cardiometabolic Health (CGCH) and holds an adjunct professorship at the Harvard T.H. Chan School of Public Health, the Chinese University of HongKong (Honorary), Guangdong General Hospital/Academy of Medical Sciences, and Fuwai Hospital (Honorary) and Chinese Academy of Medical Sciences. Prior to joining the Brown faculty, Dr. Liu was the founding director of the UCLA Burroughs Wellcome Fund Inter-school Program in Metabolic Disease and the Center for Metabolic Disease Prevention while serving as Professor of Epidemiology, Medicine, and Ob/Gyn at UCLA (tenured in 2005). Prior to that, he served as Instructor, Assistant and Associate Professor of Medicine at Harvard Medical School and the Brigham and Women's Hospital in Boston, and Assistant and Associate Professor of Epidemiology at the Harvard School of Public Health.Dr. Liu's research is concerned with the etiology of chronic diseases and their prevention and control strategies.  His group conducts both experimental and observational research that has been supported by the National Institute of Health (NIH), the Center for Disease Control and Prevention (CDC), as well as private foundations and industries including the American Heart Association (AHA) and the Burrough Wellcome Fund (BWF).  Dr. Liu's research has led to the identification and confirmation of several novel genetic and biochemical markers and gene-nutrient interactions for obesity, diabetes, and cardiovascular diseases. In particular, Dr. Liu's research first identified and validated germ-line mutations in the SHBG gene for type 2 diabetes development (NEJM 2009). Incorporating genotypes and plasma phenotypes into risk prediction, his team was the first to show the causal role of SHBG in diabetes pathogenesis and validate its clinical utilities in human populations of diverse ethnicities, opening a new path for early detection and risk management of the disease (JAMA 2006, 2007, NEJM 2009, Clinical Chemistry 2012). Dr. Liu's research also provides the first empirical evidence to quantify and standardize all dietary carbohydrates based on glycemic load (GL) and validates its physiological utility while demonstrating that  GL exchange could be beneficial in the dietary management of patients with diabetes. His work was the first to link prospectively and comprehensively refined carbohydrates characterized by a high dietary GL to increased CVD risk (AJCN 1999, 2000, 2001, 2002, 2003, 2004). To date, Dr. Liu has published >300 peer-reviewed research papers, some of which are among the most frequently cited. In 2015, he was listed as one of the most highly cited scholars with H-index>100. He has developed and taught 6 courses and directly supervised >100 trainees at Harvard, UCLA, and Brown universities, and delivered >150 invited lectures worldwide.

Dr. Liu is an elected fellow of the American Heart Association (FAHA), American Society of Clinical Investigation (ASCI), American Epidemiological Society (AES), and a permanent member of the Epidemic Intelligence Service Alumni Association (EISAA). Dr. Liu previously served on the UCLA Medical Institution Review Board (IRB). He has also served as a member and chair on committees/study sections/ advisory boards for federal and international agencies, including the Canadian Institutes of Health Research and Canadian Foundation for Innovation, European Union, the British Medical Research Council (MRC), and the World Health Organization (WHO) providing consultations on issues related to pharmaceuticals, nutrition, and global health.