Senator Sheldon Whitehouse Keynote at the America's Climate Change Conference – All This Risk: Why Are We Unable to Act? 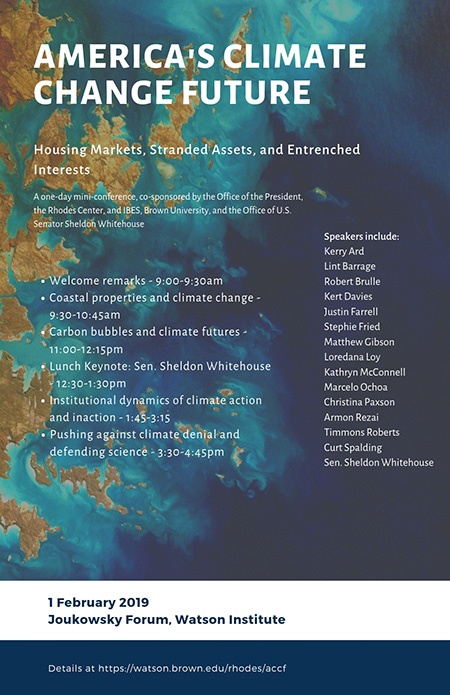 Registration is at capacity.

Rhode Islanders know they can count on Sheldon Whitehouse to fight for the middle-class values that matter most to us. Sheldon believes that every child deserves the opportunities provided by a good education, and that anyone willing to work hard should be able to find a good job. He believes in the promise of Social Security and Medicare to provide a basic measure of dignity for seniors when they retire.

Sheldon has hosted more than 100 community dinners in every corner of the state to hear the concerns of Rhode Islanders. He is dedicated to helping small businesses grow, making health care affordable for every family, and fighting to break through the barricade of special interests in Washington that are blocking action on climate change. The Providence Journal described Sheldon as “a strong-willed and articulate member of the Senate on national issues and an energetic champion of Rhode Island economic and other interests.”

The examples set by people like his father, a World War II veteran and diplomat, and by great figures in Rhode Island public life, like U.S. Senator Claiborne Pell and Governor Bruce Sundlun, taught Sheldon the good that public service can do for our country and our state. Throughout his more than thirty years in public service, Sheldon has focused on the basic issues that make a real difference in people’s lives.

A graduate of Yale University and the University of Virginia School of Law, Sheldon served as Rhode Island’s Director of Business Regulation under Governor Sundlun before being recommended by Senator Pell and nominated by President Bill Clinton to be Rhode Island’s United States Attorney in 1994. He was elected Attorney General of Rhode Island in 1998, a position in which he served until 2003. On November 7, 2006, Rhode Islanders elected Sheldon to the United States Senate, where he is a member of the Budget Committee; the Environment and Public Works Committee (EPW); the Judiciary Committee; and the Finance Committee.

He and his wife Sandra, a marine biologist and environmental advocate, live in Newport. They have two children.

Whether at one of his community dinners throughout the state, meetings with small business owners, or discussions at senior centers, Sheldon is listening to Rhode Islanders—and putting their ideas to work in Washington.