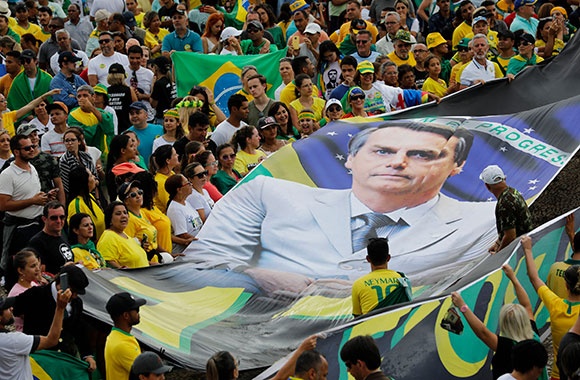 “The Brazil Initiative recognizes the crucial need for students to examine comparatively what’s happening in the world, including the United States, the Philippines, Turkey, Brazil, and other nations.”

With Rights Under Attack in Brazil, the Brazil Initiative Convenes Students, Scholars, and Activists

Inaugurated as Brazil’s 42nd president on January 1, 2019, Jair Bolsonaro represents a sharp right turn from his most recent predecessors, who came from the Workers’ Party. “He wants to attack all of the social rights of Afro-Brazilians, indigenous peoples, women, LGBTQ individuals, and landless peasants,” says James N. Green, director of the Brazil Initiative at the Watson Institute, which is recognized as the leading institution for scholars, students, and activists from Brazil and the United States to gather to learn more about Brazil’s past, present, and future. “The Brazil Initiative recognizes the crucial need for students to examine comparatively what’s happening in the world, including the United States, the Philippines, Turkey, Brazil, and other nations.”

“To that end, we are focusing on three interconnected themes – Afro-descendant/Afro-Brazilian issues, indigenous issues, and the current political climate creating a rise in populism,” says Ramon Stern, administrator of the Initiative. These themes, Stern asserts, are particularly pertinent now.

The Brazil Initiative’s Spring conference featuring activists and academics from Brazil and the United States, will address Brazil’s current situation and the popular resistance challenging efforts to undermine democracy, strip away social rights, and overturn the progresses that have occurred in the past 30 years. Green hopes to bring two significant speakers to campus – the first indigenous woman elected to Brazil’s Congress, Joênia Wapichana, and Jean Wyllys, the openly gay Congressman from Rio de Janeiro, who recently decided to go into political exile due to serious death threats made against him by far-right forces in Brazil.

Deeply troubled by Bolsonaro’s presidential campaign, Green launched – and now serves as the national coordinator for – the U.S. Network for Democracy in Brazil, a nonpartisan, decentralized, and democratic coalition responding to Brazil’s political situation. Of the network, which will educate Members of the U.S. Congress and others about Brazil’s situation and its significance, Green says, “This is the most important thing I’ve done to help support an international democratic movement. More than 1,200 people in more than 236 colleges and universities are now participating in the network, and the interest grows daily.” This March, Green plans to hold a commemoration honoring the memory of Marielle Franco, a Rio de Janeiro City Councilwoman and human rights activist and advocate for Afro-Brazilian communities, who was assassinated last March in Brazil. That event, which will be held on the Brown campus, is expected to be one of 100 such memorials across the country.

Endangered academic freedoms have led to “an increased number of academics looking at the possibility of employment outside of Brazil; I’ve heard of individuals who’ve lost their jobs, others who have been threatened with job losses, and still others who feel intimidated,” says Green.  After Debora Diniz, a University of Brasilia professor, testified before the Brazilian Federal Supreme Court on women’s rights to choose abortion, she received death threats and fled Brazil when she couldn’t be protected. “She is the first political exile of the new Brazilian government [now] in the United States,” says Green

Believing that most professors espouse Marxist philosophies in classrooms, Brazil’s new Minister of Education, Ricardo Vélez Rodríguez, wants to eliminate academic discussions of political philosophies and of sex, gender, and feminism. This desire to return to traditional family values is partially fueled by the strong evangelical Christian movement, representing some 30 percent of Brazil’s population.

Green continued to explain that Bolsonaro seeks to assume control of indigenous territories, which are federally recognized and protected under the 1988 constitution, to expand livestock, grain, sugarcane, and soybean production. Already harmed by significant land deforestation under Bolsonaro’s predecessor, indigenous workers would face reduced job opportunities and displacement.

Bolsonaro’s desire to privatize the nation’s Social Security system and as many state-owned industries as possible – including the country’s huge oil reserves – may well enrich foreign investors, banks, and private equity firms, all at the expense of Brazil’s citizens, should the economy sour. Foreign relations are equally troubling. “Traditionally, Brazil’s foreign policy has maintained good relations with countries throughout Latin America, Europe, and Asia,” Green explains. “He is now prioritizing relations with Trump’s White House. And, Bolsonaro’s campaign slogan and government motto, akin to ‘Making Brazil Great Again,’ is ‘Brazil above everything, and God above everyone.’”

“The Brazil Initiative offers opportunities for people to learn about Brazil, one of the most recent countries to elect a far right-wing leader. Our programs, activism, research, and academic studies help expand students’ horizons of the world they live in and how they might change it for the better,” says Green. “The Brazil Initiative reinforces the Watson’s mission promoting a just and peaceful world through research, teaching, and public engagement.”

For information and a full schedule of the Brazil Initiative’s spring 2019 events, including its Spring Film Series, visit https://watson.brown.edu/events/series/brazil-initiative

For more information about the U.S. Network for Democracy in Brazil, visit https://www.facebook.com/democracybrazil/