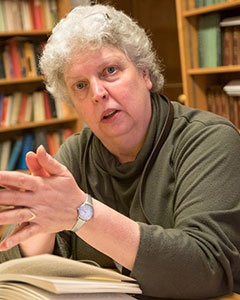 Dore Levy received her B.A. in Chinese Language and Literature from Yale, a Certificate of Diligent Study in Oriental Languages from Cambridge University, and a Ph.D. in Comparative Literature from Princeton. She came to Brown in 1981 as the first specialist in a non-western culture in Comparative Literature, and subsequently has taught a broad variety of courses in Asian Studies, with a focus on traditional Chinese culture. Subjects of her publications include narrative literature in China, the relation of literature and the visual arts, and literature and medicine.

As undergraduate advisor in both Comparative Literature and East Asian Studies, Professor Levy is particularly concerned with supporting students who seek to study foreign cultures and study abroad. In her leisure time, she occasionally performs musical comedies, and enjoys travel, children's literature, and knitting.