US spending on Middle East wars, Homeland Security will reach $4.79 trillion in 2017

Total U.S. spending on national security related to the post-9/11 war on terror has reached $3.6 trillion, and interest on funds borrowed to pay those bills could climb to $7.9 trillion by 2053. 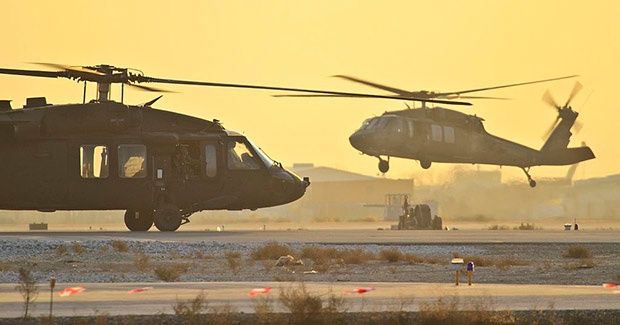 PROVIDENCE, R.I. [Brown University] — As the 15th anniversary of the 9/11 attacks approach, the United States has spent or taken on obligations to spend more than $3.6 trillion in current dollars on the wars in Iraq, Afghanistan, Pakistan and Syria and on the Department of Homeland Security.

That’s according to just-released data in the second of two reports this summer from the Costs of War Project based at Brown University’s Watson Institute for International and Public Affairs.

This represents a $300 billion increase since 2015, according to the report, and the amount of the connected expenditures vastly outstrips the 2002 estimate by Lawrence Lindsey, George W. Bush’s chief economic adviser, that the cost of waging war in Iraq would not exceed $200 billion.

The total expenditure for the wars in the Middle East and the war on terror rises to $4.79 trillion when dedicated war spending for the coming fiscal year is added in, along with the nearly $32 billion requested for the Department of Homeland Security for 2017, according to the study. That number, however, does not include all future interest on debt associated with the wars.

“This is the most comprehensive analysis of the budgetary costs available, produced as part of the Costs of War Project, a large research team assessment of the wider, and also staggering, human and social impact of the wars,” said Catherine Lutz, co-director of the project and the Thomas J. Watson Jr. Family Professor of International Studies and professor of anthropology at Brown University.

Findings on the human costs of the wars in Afghanistan and Pakistan were published in a separate report released in early August. That study, like the new report with aggregate budget data, was written by Neta C. Crawford, professor of political science at Boston University and co-director of the Costs of War Project.

“One of the major lessons of the post-9/11 wars, which applies to all wars, is to beware of promises of quick military victories and inexpensive occupations — wars generally cost a lot of money from start to finish and ultimately to their long aftermath in the lives of veterans and their families,” Crawford said.

The study, “U.S. Budgetary Costs of Wars through 2016: $4.79 Trillion and Counting,” takes a wide-ranging approach to accounting for the costs of the wars in Iraq, Syria, Afghanistan and Pakistan and the war on terror, according to Crawford and Lutz.

Crawford wrote that the accounting includes Congressional war appropriations for the State Department and Department of Defense, the Homeland Security budget related to terrorism, war-related additions to the Pentagon base budget, and spending in the Department of Veterans Affairs, including the costs of future obligations to veterans of these conflicts, and the costs of interest in borrowing to pay for the wars.

The latter expense is significant. In the report, Crawford wrote that, “Interest costs for overseas contingency operations spending alone are projected to add more than $1 trillion to the national debt by 2023. By 2053, interest costs will be at least $7.9 trillion unless the U.S. changes the way it pays for the wars.”

Unlike the way it has funded previous wars, Crawford wrote, Congress has not enacted a war tax or sold large numbers of war bonds “which would have made these ‘pay as you go’ wars. Hence DOD and State Department Overseas Contingency Operations spending are considered here as borrowed.” Crawford noted that she includes the costs of borrowing as a war expense in the report.

Crawford addressed the Congressional definition of some war funding as “emergency funding,” describing needs as unanticipated, sudden, urgent, unforeseen or temporary. She assessed that some costs of the wars do not fall into the category of emergency spending.

“These expenses have been institutionalized, for example, into the spending of the Departments of Veterans Affairs, Defense and Homeland Security,” she wrote, whereas other costs “can be anticipated and estimated because they are future obligations — namely the costs of veterans’ future medical care and disability payments.”

The Costs of War report also briefly addressed the macroeconomic impact of the wars, noting that the project’s analysts have posited that “the wars likely cost tens of thousands of jobs, affected the ability of the U.S. to invest in infrastructure and probably led to increased interest costs on borrowing, not to mention greater overall federal indebtedness.”

This finding contrasts with a statement made by Lindsey in 2002 that “the successful prosecution of the war would be good for the economy,” and the overall findings in the report show that various estimates of the cost of the war made in the early 2000s, from $48 billion to $3 trillion, were too low.

Some key findings from the report: