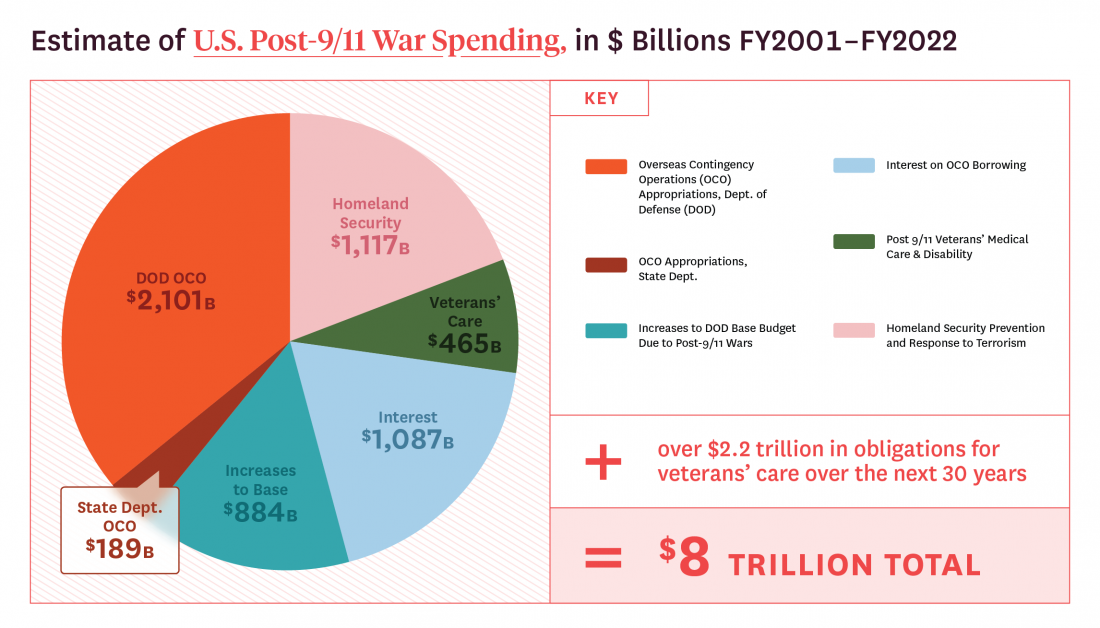 Federal budgetary expenditures for the post-9/11 wars include many expenses far beyond direct Congressional war appropriations. The approximately $2.3 trillion in Congressional appropriations through Fiscal Year 2022 for “Overseas Contingency Operations” – which include combat in the post-9/11 war zones as well as international assistance through the State Department and USAID – are just the tip of an iceberg.

Other spending directly related to the War on Terror includes additions to the Pentagon “base” budget, about $900 billion through FY2022. And while the U.S. paid for past wars by raising taxes and selling war bonds, the current wars have been paid for almost entirely with borrowed money, on which interest has to be paid. Through FY2022, the U.S. government owes over $1 trillion in interest on these wars.  Even if spending war spending ceased immediately, so that expenses for Overseas Contingency Operations and the Pentagon’s base budget went to zero, spending on interest would continue to accrue, reaching at least several trillion dollars in over the next few decades.

The federal government also has committed itself to a series of I.O.U.s – medical and disability payments for veterans and administrative overhead costs that will total another estimated $2.2-$2.5 trillion or more through from 2001 to 2050. Finally, among the costs of these wars are increases in Homeland Security spending, intended to avert the threat of a terrorist attack and respond to and recover from attacks. This spending totals over $1.1 trillion to date.

Totaling these expenses and Congressional requests through FY2022, the U.S. federal government has spent and obligated over $8 trillion on the post-9/11 wars.

Congress should require the Congressional Budget Office to make a fuller accounting of war costs, including:

Wartime Contract Spending in Afghanistan Since 2001

Eight Things You Should Know About Defense Spending and Inflation