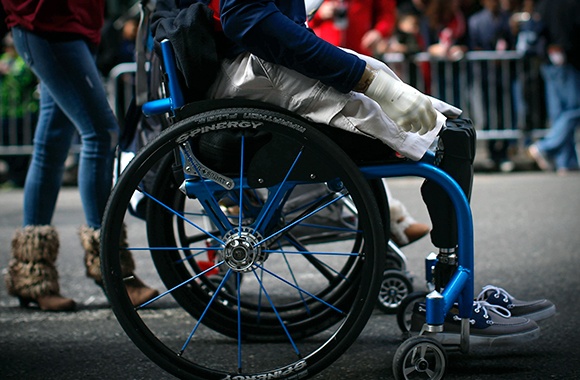 “Our research to date has documented the staggering costs of war to our nation—in terms of human suffering, federal dollars, and lost opportunities.”

Catherine Lutz, co-director of the Costs of War project

Research by the Watson Institute's Costs of War project at Brown University examines case studies of Texas and Rhode Island to reveal that billions of unacknowledged state, city and private dollars have been allocated nationwide for domestic support for the wars in Iraq and Afghanistan.

Providence, RI -- Two new papers produced as part of the Watson Institute's Costs of War project at Brown University reveal that in addition to the $4.4 trillion that the US federal government has spent and obligated to the post-9/11 wars in Iraq and Afghanistan, billions of unacknowledged state, city, and private dollars have been allocated nationwide for domestic support for these wars. Researchers Brian Smith and Luke Lattanzi-Silveus use case studies of Texas and Rhode Island war spending to highlight the many forms of local funding for veterans of the Afghanistan and Iraq wars as they return to life in the US.

“Our research to date has documented the staggering costs of war to our nation—in terms of human suffering, federal dollars, and lost opportunities,” said Catherine Lutz, project co-director. “These costs are amplified by billions of dollars spent by states, cities and other entities across the country. This is important information for policymakers and taxpayers alike.”

Texas and Rhode Island were chosen as compelling case studies for a number of reasons: Texas has the second largest veteran population in the US, behind California, and is home to roughly 250,000 Iraq and Afghanistan veterans. In Rhode Island, veterans make up approximately 9 percent of its population, which is the average nationwide.

In the case of Texas, Smith, a PhD candidate at Boston University working on the Costs of War Project, analyzed expenditures on various forms of support, including but not limited to: housing for veterans and their families, suicide prevention services, state-level Veterans’ Courts, employment services, property tax exemptions, funding for the Texas national guard, which has sent a significant number of troops to the wars, and funding from private nonprofits and charities that support veterans and their families. The paper concludes that Texas has allocated significant resources caring for its veterans – at least $637 million at the state level with an additional $123 to $149 million spent by municipalities, charities, and non-profits.

In Rhode Island, Lattanzi-Silveus, a recent Brown graduate in economics, draws on funding for services such as veterans’ housing, health care, benefits and training for unemployed veterans, benefit counseling, and interest on state debt incurred to cover these costs. He finds that the wars cost the state of Rhode Island a total of $74 million spent and obligated to date. Housing comprises the bulk of Rhode Island state veterans’ support costs. Estimating that approximately 30 percent of homeless Rhode Island veterans served in the recent Afghanistan and Iraq wars, Lattanzi-Silveus calculates that some $42 million – or 30 percent of total funds for a new veterans’ home – is attributable to the current wars.

The researchers acknowledge that calculating the costs each state spends on the wars is a difficult task for many reasons. For example, local agencies that serve veterans do not always track funds spent on veterans of these particular wars. Furthermore, the totals do not account for the costs that states absorb supporting Iraqi and Afghan war refugees, many of whom will need treatment for PTSD and other war-related injuries and disabilities, among other services. These figures also exclude the money that private contractors who worked in the warzones must spend obtaining health care and other support services, which they and their families often must shoulder themselves. Finally, many long-term costs, such as that of housing and providing health care and rehabilitation for veterans as they age, have yet to be felt.

Commenting on what case studies such as Texas and Rhode Island suggest about total war expenditures, Smith stated, “To calculate the financial costs of the post-9/11 wars to the US government, policymakers must look at the vast expenses shouldered by local governments and private individuals, who are often the first to respond to those assimilating back into civilian life.”

About the Costs of War Project:

First released in 2011, the Costs of War report has been compiled and updated by more than 30 economists, anthropologists, lawyers, humanitarian personnel, and political scientists as the first comprehensive analysis of over a decade of wars in Afghanistan, Iraq, and Pakistan. The Costs of War Project at Brown University’s Watson Institute for International Studies analyzes the implications of these wars in terms of human casualties, economic costs, and civil liberties.

Brian Smith is a PhD candidate in Boston University’s Political Science Department. He also has an MS in Ethics and Public Policy from Suffolk University. Smith’s research interests include military ethics, the history of international relations, political theory and American political thought.

Read Brian's paper: "The Cost of Iraq and Afghanistan Veterans' Care to Texas"

Luke Lattanzi-Silveus is a 2014 graduate from Brown University. He received a degree in Philosophy, Politics and Economics and his main interests lie in the fields of political economy and the history of economic thought.

Read Luke's paper: "Costs of the Wars in Afghanistan and Iraq for the State of Rhode Island"

"Brown researchers put cost of war for R.I. at more than $70 million" - The Providence Journal