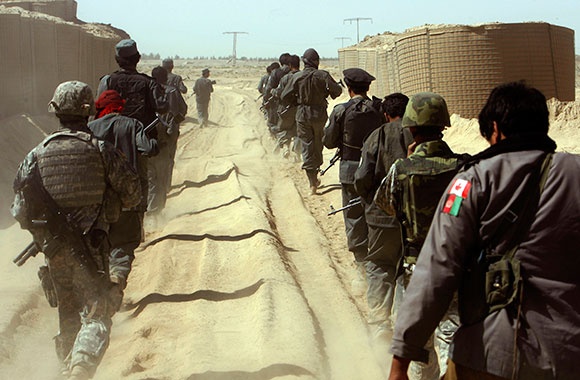 Providence, RI -- Afghan security forces, like their fellow citizens more generally, do not view the US-led war in Afghanistan as “their war.”

This is a primary policy-relevant conclusion reached in one of two new reports issued today by the Costs of War Project at Brown’s University’s Watson Institute for International and Public Affairs.

“Not Their War to Fight: The Afghan Police, Families of their Dead and the American War,” by Harvard University Visiting Assistant Professor Anila Daulatzai, draws on four years of anthropologic fieldwork in Kabul and elsewhere in Afghanistan, and on polls by the Asia Foundation, Gallup and others to assess perspectives toward the war.  Among the findings: members of the Afghan National Police Force (ANP) do not see the war as their own; they participate as a means of employment to make a living and support family members, particularly given the lack of economic opportunities after 35 years of armed conflict and foreign occupation. As Daulatzai explains, the ANP, their families and Afghans more broadly “do not see themselves as responsible for reversing the mayhem the US is leaving behind.”

In a separate study, “Bombing Pakistan: How Colonial Legacy Sustains American Drones,” journalist and Columbia University PhD candidate Madiha Tahir investigates the decade-long US drone strikes over the Pakistani borderlands, known as Federally Administered Tribal Areas (FATA), or tribal areas. In doing so, Tahir examines the colonial-era legacy that has led to the now acceptable practice of punishing an entire group based on the actions of one or a few people living within externally imposed borders.

The paper cites the thousands of Hellfire missiles that have destroyed people and homes in the region, noting that residents of the tribal areas also live with violence by opposition forces, such as the Pakistani Taliban as well as the Pakistani government. According to Tahir, common wisdom often cited by Western journalists and policy makers when referring to the tribal areas is that they are “lawless,” implicitly justifying the constant bombardment to which residents are subject. Tahir argues that, in fact, the region has long been rigidly organized by British and later, Pakistani law, setting the stage for drone strikes as a form of collective punishment against residents.

Tahir offers examples to illustrate that the US drone program in the tribal areas is not guided by international law. Rather, it is rooted in colonial policies long pre-dating the use of drones.  She writes: “…how American drone attacks are conducted — for all the vaunted technical precision and capabilities of armed drones — is bound up with an old colonial game of sorting people into those who are ‘tribal’ and those who are marked out as proper modern citizens.”  In doing so, Tahir emphasizes that US policymakers and journalists who argue that drones operate based on a logic of precision are therefore misguided, and that, in fact, drones have “license not to distinguish between anyone” in the region.

“These papers underscore what we already know: that there are significant and enduring costs of war beyond the staggering financial costs we have documented,” said Catherine Lutz, Brown University Professor and co-director of the project. “These findings are valuable for lawmakers as they consider the policy and resource allocation decisions they must continue to make in regard to the wars in Afghanistan and Pakistan.”

About the Costs of War Project

First released in 2011, the Costs of War report has been compiled and updated by more than 35 economists, anthropologists, lawyers, humanitarian personnel, and political scientists as the first comprehensive analysis of over a decade of wars in Afghanistan, Iraq, and Pakistan. The Costs of War Project at Brown University’s Watson Institute for International and Public Affairs analyzes the implications of these wars in terms of human casualties, economic costs, and civil liberties.

Anila Daulatzai is an anthropologist with extensive research experience in Afghanistan and Pakistan.  She will be teaching at Brown University and contributes to the Costs of War project at the Watson Institute.

Madiha Tahir is a Ph.D. candidate at Columbia University, an independent journalist and a contributor to the Costs of War project.