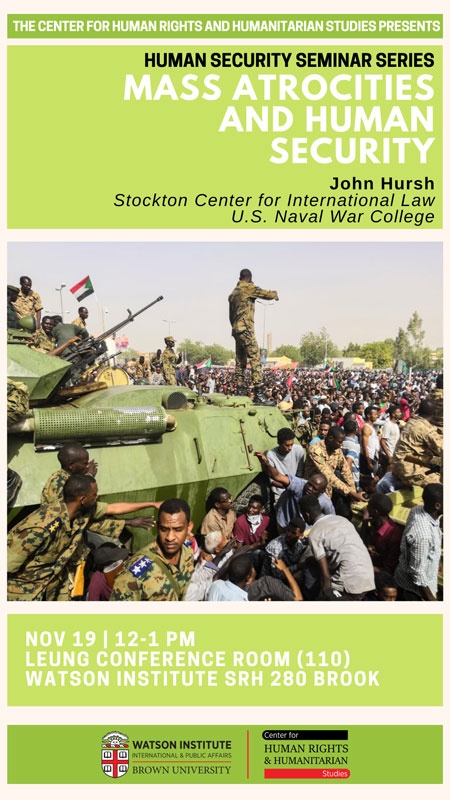 Mass atrocities—instances of genocide, crimes against humanity, and war crimes—are the most serious violations of international law and an affront to human dignity. Despite repeated calls of “never again,” mass atrocities continue and the perpetrators frequently escape accountability. Contemporary examples include the armed conflicts in Syria and Yemen, as well as protracted violence in South Sudan, Democratic Republic of the Congo, Iraq, and Afghanistan.

Mr. Hursh discusses the understudied link between atrocity crimes and corruption, particularly political corruption involving the plunder of a state’s natural resource wealth. In these situations, the resulting human insecurity can generate civil unrest, leading authoritarian regimes to begin an escalating cycle of violence that ultimately results in atrocities. Drawing on his legal research and professional experience working for the Enough Project, an NGO committed to ending genocide and crimes against humanity in East and Central Africa, he outlines the legal framework, policy challenges, and strategic considerations for addressing these crimes.

John Hursh is Director of Research at the Stockton Center for International Law at the U.S. Naval War College and Editor-in-Chief of International Law Studies, the oldest international law journal in the United States. Previously, he was a Policy Analyst at the Enough Project, an NGO based in Washington, D.C. that works to end genocide and crimes against humanity in East and Central Africa, where he focused on Sudan. During his time at Enough, he conducted fieldwork in Sudan and Uganda, attended and monitored peace negotiations in Ethiopia, and completed research demonstrating the link between corruption and poor resource governance to atrocity crimes. An active commentator and interdisciplinary scholar, he has published academic articles on numerous security and human rights issues, including women's rights in Tunisia following the Arab Spring, local land grabs in Namibia, water scarcity in Morocco, and the construction of otherness in international armed conflict. He is a regular contributor to Just Security and has also written for African Arguments, World Politics Review, and the Daily Maverick.