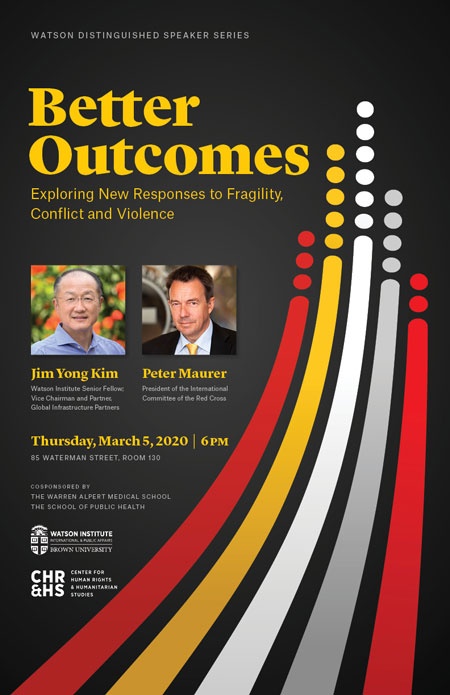 Loss of life. Cities in ruin. Schools, hospitals abandoned. Scarce food or jobs. Loss of safety, dignity, hope. The impact of today’s violent conflicts are wide reaching, not only destroying lives and physical infrastructure but also social and economic systems.

In an era of protracted warfare, humanitarian action must go beyond the short-term emergency response. Humanitarians are being asked to rebuild and sustain water and health systems, to provide means for people to regain economic autonomy, and to help restore communities’ resilience. The narrowly defined concepts of ‘humanitarian’ and ‘development’ are being dynamically reshaped, requiring new forms of partnerships built on expertise, skills, and influence to respond to the long-term effects of conflict, violence and fragility.

Please join President of the International Committee of the Red Cross Peter Maurer and Watson Institute Senior Fellow and former World Bank Group President Dr. Jim Yong Kim in a lively discussion with Dr. Adam Levine, director of Watson's Center for Human Rights and Humanitarian Studies, on how the challenges of protracted conflict demand focus and action from the humanitarian and development communities. Introduction by Layla Beckhardt '20, International Relations concentrator.

Co-sponsored by the School of Public Health and the Warren Alpert Medical School.

Peter Maurer is the President of the International Committee of the Red Cross (appointed in 2012). Under his leadership, the ICRC carries out humanitarian work in over 80 countries. As President, Mr. Maurer has a unique exposure to today's main armed conflicts and the challenges of assisting and protecting people in need. He travels regularly to the major conflict theatres of the world including Syria, Iraq, Yemen, South Sudan and Myanmar. As the ICRC’s chief diplomat, and through the ICRC’s principled, neutral approach, Mr Maurer regularly meets with heads of states and other high-level officials as well as parties to conflict, to find solutions to pressing humanitarian concerns.

Mr Maurer has served as Secretary of State for Foreign Affairs in Switzerland as well as the Ambassador and Permanent Representative of Switzerland to the United Nations in New York. As a diplomat he worked on issues relating to human security, including mine action, small arms and light weapons as well as on the responsibility of states in the implementation of international humanitarian law.