Drivers of Violence Against Health Care in War, and What We Need to Do About It 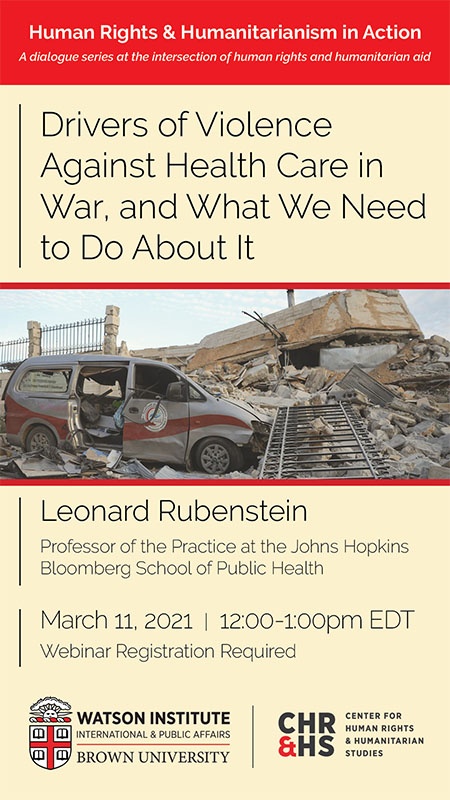 Pervasive violence against hospitals, patients, doctors, and other health workers has become a horrifically common feature of modern war. These relentless attacks destroy lives and the capacity of health systems to tend to those in need. Inaction to stop this violence also undermines long-standing values and laws designed to ensure that sick and wounded people receive care.

Based on extensive research and compelling personal stories of front-line health workers, Professor Rubenstein describes the logics of attack by both state militaries and non-state armed groups, the obstacles to respect for and protection of health care in war, and lessons the international community needs to learn to protect people already suffering in war and those on the front lines of health care in conflict-ridden places around the world.

Len Rubenstein is Professor of the Practice at the Johns Hopkins Bloomberg School of Public Health, and Director of the Program in Human Rights, Health and Conflict. He is also a core faculty member the Berman Institute of Bioethics and the Center for Humanitarian Health at Johns Hopkins University. Prior to coming to Johns Hopkins in 2009, he was a Jennings Randolph Senior Fellow at the United States Institute of Peace, and before that Executive Director and then President of Physicians for Human Rights. He has a J.D. from Harvard Law School and LL.M. from Georgetown Law School. He is a member of the Council on Foreign Relations.

Professor Rubenstein’s work focuses on human rights, health armed conflict. He has done extensive research on impacts of conflict on health in Syria, the West Bank and Gaza, Afghanistan, Yemen and other parts of the world. He founded and chairs the Safeguarding Health in Conflict Coalition, a group of 40 humanitarian, human rights, health provider organizations working at the global and national levels, that seeks to reduce attacks on and interference with health workers, patients, facilities and transports. He is the recipient of numerous awards, including the Congressional Minority Caucuses’ Healthcare Hero Award and the Sidel-Levy Award for Peace of the American Public Health Association. He has appeared before Congress, the World Health Assembly and the UN Security Council. His book, Perilous Medicine: The Struggle to Protect Health Care from the Violence of War, will be published in 2021.