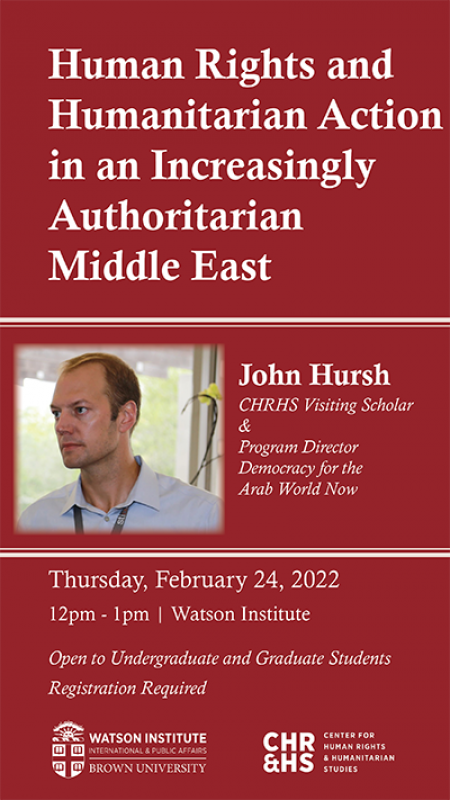 Open to Brown undergraduate and graduate students. Register here to attend the discussion.

John Hursh is the Program Director of Democracy for the Arab World Now (DAWN), an NGO founded by Saudi dissident and journalist Jamal Kashoggi to promote democracy, the rule of law, and human rights for all of the peoples of the Middle East and North Africa. Previously, he served as Director of Research at the Stockton Center for International Law and Editor-in-Chief of International Law Studies at the U.S. Naval War College in Newport, Rhode Island. He also served as Policy Analyst at the Enough Project, an NGO based in Washington, DC working to end genocide and crimes against humanity, where he focused on Sudan.

He has completed research in Sudan and Uganda addressing human rights violations, humanitarian issues, and government corruption. He also observed peace negotiations between the Government of Sudan and armed opposition groups in Addis Ababa, Ethiopia. He has published numerous academic articles and book chapters addressing a range of human rights and humanitarian issues. He is a regular contributor to Just Security and his writing has appeared in African Arguments, World Politics Review, and Foreign Policy.