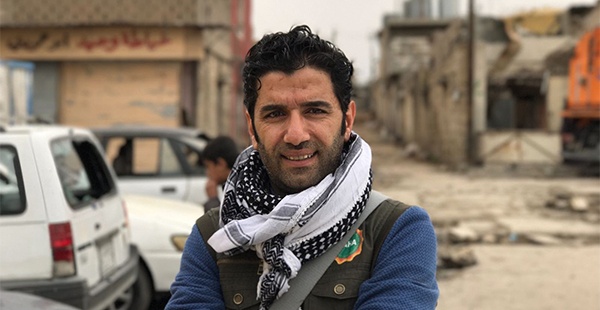 Dr. Tayseer Alkarim is a Syrian physician, humanitarian, and nonviolence activist, with over a decade of field experience in emergency operations in humanitarian crises, including refugee and internally displaced persons (IDP) camps.

When the armed conflict broke out in Syria in 2011, he co-founded the Doctors Coordinate of Damascus, which was a pilot initiative providing healthcare services to civilian victims outside the governmental health system that is controlled by the Syrian regime.  He also co-founded the Syrian Non-Violence Movement which led a wide range of civil and peaceful activities across Syria.

After leaving Syria in 2012, Dr. Alkarim became entirely devoted to working on humanitarian interventions in armed conflict zones and low resource settings. With Women and Health Alliance, a France-based organization, he worked on the frontlines during the Battle of Mosul (2016-2017); he also worked closely with the Yazidi community in Sinjar Mountains and IDP camps in the Kurdistan region of Iraq, these projects were in partnership with WHO, UNFPA and other international partners. Since 2019, he has led the humanitarian operations of MedGlobal, a US-based organization, to support the wrecked healthcare facilities in Yemen, particularly in the medical training sector.

Functioning in a variety of roles within both local and international organizations, he has been instrumental in responding to the most complex humanitarian crises, especially in violence settings. With firsthand experience in the geopolitical environment in the Middle East North Africa (MENA) region, he has collaborated with local, regional and international partners to provide healthcare services to vulnerable populations. Dr. Alkarim has also responded to the migration crisis in Europe (Greece and Italy), Africa (Uganda and South Sudan) and south Asia (Bangladesh and Pakistan) by delivering healthcare services, supplies, and medical training.

With the rapidly spreading COVID-19 pandemic, he co-founded First Consultant Information Center (FCIC), which is a grassroots initiative providing context-specific advice for frontline medical and humanitarian workers in more than ten low-income and conflict-affected countries.

He recently published several papers on the impact of the COVID-19 on vulnerable populations in armed conflict zones. He is also working on three research papers in progress with London School of Economics, Ann and Robert H. Lurie Children’s Hospital of Chicago, and Center for Human Rights and Humanitarian Studies.

Dr. Alkarim focuses currently on studying two topics; the first one is the impact of violence and other institutional factors on public institutions, and the second topic is future progressive models of humanitarian interventions.