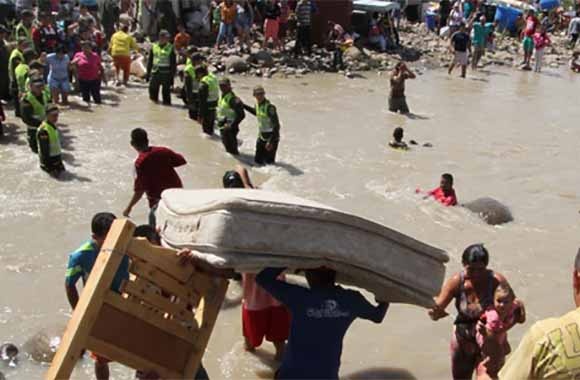 "At the ICRC, we are working on solutions to ensure that families always remain in contact with their loved ones...but, despite all these efforts and increased international humanitarian spending in Colombia, the overall humanitarian response continues to fall short of the needs."

Tell us about your time as the Field Team Lead for ICRC in Colombia. What kind of humanitarian impact do you hope to have?

In the last three months, I have travelled through Colombia to understand the most pressing needs of Venezuelan migrants as well as those of receiving communities in an effort to define the ICRC’s response. My team has travelled over 3000 km on land and sea to observe the situation first-hand, and interviewed over 300 people – two-thirds Venezuelan and one-third Colombian – to hear what challenges they face. Another ICRC team undertook the same task in parallel in other regions to ensure we cover all relevant geographic areas in our analysis.

The large majority of people I have talked to were seeking economic opportunities and medical assistance to help themselves and their families back home. I was most impressed by the level of solidarity with Venezuelan migrants among ordinary Colombians; they would often gift food, drinks and clothes to people in need, or even allow them to stay the night. The Colombian government has responded by launching a string of programs to regularize the migratory status of Venezuelans. By the end of August 2018, around 830 thousand Venezuelans were included in these programs and could thereby access the formal labor market and gain health coverage.

There remain challenges, of course. The government is seeking foreign support to finance the additional spending in health care, some schools have become overcrowded, and many fear their daily subsistence due to the influx of cheap and often skilled workforce. Venezuelans, on the other hand, endure a rather long affiliation process to health care providers; they have difficulty validating their professional degrees; and, some complain about employment discrimination or xenophobia in certain parts of the country.A major humanitarian concern relates to those Venezuelans whose status remains irregular – over one hundred thousand people, according to the Colombian government’s estimates, but there might be many more. They tend to work as street vendors, construction workers, nannies or caretakers, but an alarming number of men, women, and possibly minors have resorted to prostitution as a means of sustenance.

At the ICRC, we are working on solutions to ensure that families always remain in contact with their loved ones, we donate medicines to select hospitals, work on programs to address sexual violence, and strengthen local initiatives that offer shelter, food, medical attention and psychological support to migrants in need and their host communities. Beyond the Colombian Red Cross and religious charity organizations, it was promising to see new local and Venezuelan diaspora organizations pop up to assist in this endeavor. But, despite all these efforts and increased international humanitarian spending in Colombia, the overall humanitarian response continues to fall short of the needs.

A particular concern for the ICRC in Colombia is how the influx of migrants affects the armed conflict. Especially in the border areas, some speculate that armed groups are recruiting fighters among Venezuelans, including minors, who are likely to be drawn to these groups not so much for ideological reasons but by the promise of economic opportunities. Although migration is not the only or main factor, I see a risk that Colombia will relapse into a higher intensity conflict. This is why we are doubling down on our efforts to remind weapon bearers about their obligations and amplify the rights of people living under their control.

Expand upon some of your work focusing on questions surrounding humanitarian financing, coordination, and protection. What conclusions have you been able to draw from your research? Can you identify and describe various challenges to humanitarian aid?

One thread of my work has focused on inter-agency reforms through which key humanitarian actors, the United Nations and leading NGOs, pledge to hold themselves to higher standards. These reforms tend to address weaknesses in collective action, such as leadership and coordination, but also strive to give the sector’s best practices a push through commitments on the use of cash-based assistance and accountability to affected people, among others.

At the Global Public Policy Institute, we had the opportunity to review the last three reform processes – the Humanitarian Reform (2005), the Transformative Agenda (2011) and the Grand Bargain (2016) – and found that each of these had an overall positive balance. Although the reforms have fallen short of their stated objectives, our conclusions present a puzzle: in a sector with no hierarchy where donors too have little leverage over aid organizations, what drives aid organizations to sacrifice their autonomy?

Three possible explanations stand out. First, aid organizations tend to corner themselves in a rhetorical trap. When they publicly announce their reform commitments, the public, their peer organizations and donors can goad them into compliance. Second, aid organizations tend to act under the impression that their efforts will win donor concessions in terms of increased and more flexible funding, even though there is no evidence of such a causal link. Third, the very people who work within aid organizations tend to attach a high value to the collective effort. Each reform was championed by a group of dedicated, self-critical entrepreneurs who sought to improve their practices after noting the humanitarian community’s failure in responding to the Indian Ocean tsunami, the Haiti earthquake, and the Syrian civil war – three crises that touched off key reforms.

Tell us about the project you completed with GPPI that focused on security assistance and non-state actors in Iraq, Syria and Afghanistan. What methods did you use to assess these factors? How will/have you used your findings?

This project came on the heels of the experiences of my colleague, Erica Gaston, and me working in the Middle East: a recognition that there is awfully little written about the micro-level dynamics of the region’s otherwise well-covered conflicts. For example, most research on Iraq went only as far as to differentiate between the different interests of ethno-religious groups, but there was little to be found on the unique experiences of communities in the south of Mosul. Without this level of detail on the lives of people we aim to assist, how are we to devise good policy?

The research has honed in on the conflicts in Afghanistan, Iraq, and Syria, where governments and foreign powers have increasingly been relying on quasi-state armed actors in their operations. I accompanied this project until the middle mile, focusing on the Iraqi context. We kicked off the research with a thorough literature review; convened expert workshops together with our partners, the American University of Iraq in Suleimani and the Afghan Analyst Network; and, conducted qualitative semi-structured interviews in the field (we conducted most interviews ourselves).

In Iraq, the aim was to present an account of local communities and their experiences with the relevant armed actors, such as the different fractions of the Popular Mobilization Forces. We led field research from February to July 2017 in 11 geographic areas, mostly at district or sub-district level with armed actors, local government and civil society representatives to understand control patterns, rights abuses, displacement and return dynamics, and other humanitarian consequences.

To ensure that the project produces relevant findings for security assistance, we held precursory discussions with foreign government representatives with a stake in the conflicts, country experts and local researchers. After the field research, we communicated key findings through a War on the Rocks op-ed on the Micro-Politics of Territorial Control in Iraq, with recommendations on how to navigate the delicate situation created by the Kurdish referendum on independence and Baghdad’s reassertion of control over Kirkuk (all other research outputs are available on the project’s website). As an example of the project’s outputs on Afghanistan, see The Leahy Law and Human Rights Accountability in Afghanistan. For more information on the ongoing research, you could contact the project’s coordinator and lead researcher, Erica Gaston.