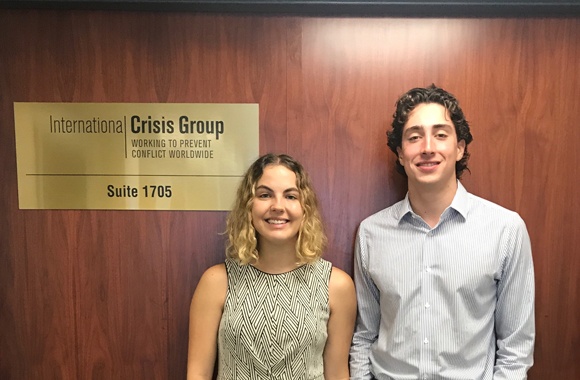 "The internship has been an amazing opportunity to really become acquainted with the dynamic and complex social change that is happening in the region now—invaluable knowledge that I hope to expand upon after graduation."

Heather Davis (IR '19) and Benjamin Guggenheim (IR, '19) are spending their summer in New York City interning with the International Crisis Group (Crisis Group). This newly created internship program established by the Humanitarian Innovation Initiative at Brown (HI²) provides the opportunity for Brown undergraduate students to learn about and engage in the work being done at the Crisis Group. The Crisis Group is an independent, non-profit, non-governmental organization with some 120 staff members on five continents, working through field-based analysis and high-level advocacy to prevent and resolve deadly conflict.

As part of this internship program, both Heather and Benjamin are working with the Crisis Group to roll out a new digital media project that involves creating concise, informative, publically accessible summary reports, or “conflict explainers,” on the numerous ongoing conflicts that the Crisis Group covers. We checked in with Heather and Benjamin to hear how their internship experiences are going and learn more about what they are working on.

What has been the most rewarding aspect of the internship thus far?

Heather: The coolest aspect of this internship has definitely been my opportunity to talk over the phone with Crisis Group field agents across the world. While timing calls with analysts in Afghanistan, Bangladesh, China, and other Asian countries presents its own challenges, these conversations have provided new insight into life working in the field and rubbing shoulders with actors both vilified and praised in the West. These analysts have often been active in their countries for over a decade, and the insight they provide to my reports is fascinating and invaluable. I’ve especially loved connecting history I learned in class at Brown with the frank words of peace advocates working to shape the events of my next textbook.

Benjamin: The most rewarding part of the internship has definitely been corresponding with our analysts in the field. So far I have talked to an analyst who recently accompanied the UN Special Envoy around Libya, one who had spent a significant amount of time in Sahrawi refugee camps in Southern Algeria, and another who is considered a preeminent expert on Tunisian politics. Many of these people have unparalleled access to power players in their particular region, are uniquely positioned to talk to all sides in the conflict, and therefore have some of the keenest insight into what the problems are and how one might go about addressing them. As an international relations concentrator with a regional focus on North Africa, the internship has been an amazing opportunity to really become acquainted with the dynamic and complex social change that is happening in the region now—invaluable knowledge that I hope to expand upon after graduation.

How have your studies at Brown prepared you for the work you are engaged with at the Crisis Group?

Benjamin: I think my studies at Brown have prepared me in many senses. In one sense, I have learned in my international relations and history classes how to break down social issues and understand them from many perspectives. Perhaps more importantly, those classes have prepared me to be a concise and efficient writer. Over the past three years, I have learned how to structure and format essays, identify important information, and give a certain flow to paragraphs. I have come to understand that less is always more when it comes to good writing. These analytical and writings skills have been especially important for explaining these conflicts, which often have long histories and complex sets of actors. There are a dozen ways to narrate a given conflict, and the certain narrative you choose can drastically change how these situations are viewed and interpreted. Thus, my studies at Brown have prepared me for the large responsibility of writing about these conflicts in a way that reflects the truth on the ground.

Heather: International Relations classes taken at Brown have been the backbone of my experience at Crisis Group. The origins of the most difficult and often long-lasting conflicts of the modern day are not something one can understand through a few hours of research, especially due to the overlapping histories of countries within a region. My regional focus on East Asia has provided me with basic understanding of the colonial influences on the region, and additional experience with specific histories such as that of the Rohingya in Myanmar or the split of Korea. The academic language of IR also permeates conversations with fellow interns and desk officers, a vocabulary I speak thanks to my academic work at Brown.

How do you envision your experience with the Crisis Group will inform your studies at Brown in the upcoming year?

Heather: Working at a non-profit focused on political advocacy has opened my eyes to the influence individuals can have on even huge, international conflicts. Before, these conflicts seemed like forces of nature even the primary actors could only watch blow through their lives. While the conflicts don’t seem simpler after my time at Crisis Group, much to the contrary, they do feel impactable. I have seen the influence accurate information wielded by the right person at the right time can have on matters of life and death. More than anything, the importance of local connections and rapport now stands highlighted in my perception of international advocacy. At Brown, I hope to look more closely into the role of “advisors” that have quietly shaped the path of our modern conflicts.

Benjamin: Working at the Crisis Group has really validated the idea that I want to immerse myself in other cultures and societies in the future. One thing that I have learned talking with the field-based analysts is that, at the heart of their work, they are really just facilitating dialogue, creating a common basis for people in conflict to recognize each other’s grievances and address disagreements peacefully. I think I would like to continue to develop skills at Brown that allow me to bridge boundaries between people, whether it be through continued foreign language, history, or other classes that expose me to aspects of another culture.