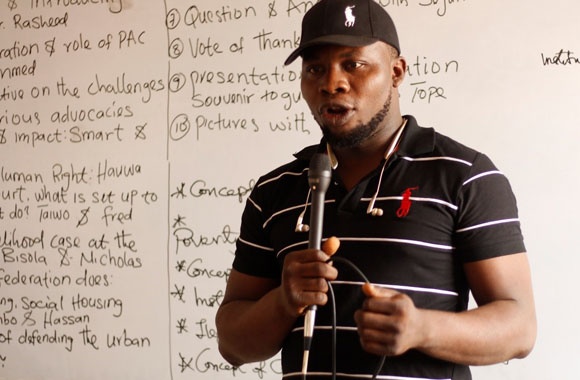 "As a geospatial scientist and data analyst, I have brought my skillsets to the table as a means of telling the stories of climate change, the community experience/vulnerabilities and adaptive capacities of the poor often left to the impacts of climate change and development policies."

Aro Joseph Kayode (HI² Interntaional Fellow) is a Climate Change Analyst, an ardent advocate for climate justice, and a creative GIS analyst dedicated to using the knowledge of geospatial technologies to advancing the research and Human rights activism in his home country, Nigeria, where he advocates for inclusion and social justice by building capacity for poor communities. He has a Master`s in Geography from the University of Ilorin, Nigeria, and a Bachelors from Federal University of Technology, Yola, Nigeria.

HI² -- Tell us about your work as the Project Manager at the International Association of Young Geographers, West Africa, as the Director of GISCleric International, and as the Mapping and Community Profiling Data Analyst with the Justice and Empowerment Initiative. What drew you to these positions, and how do they allow you to pursue your interests in climate justice, geospatial technologies, and human rights?

In 2012, the Network for future geographers was set up to bring back the relevance of the Geographic curriculum in schools. Three people pioneered this movement: Isaac Pola (Ghana) who is now the Africa wide director of the International Association of Young Geographers, Abdulquadri Ademola (Nigeria) who pioneered the movement in Nigeria, and Cephas (Benin Republic) who handled the francophone dimension of the movement. These three individuals pooled resources and networks to ensure young minds found geography attractive.

By 2013, I met with Ademola and the then Matron of the network in Nigeria (Dr, Ogunleye-Adetona Comfort) while teaching in the University of Ilorin and thus began my journey into the NFG. I was immediately assigned roles and responsibilities as the IT manager of the network in Nigeria and then made Vice Coordinator of the network (assisting Ademola). We had our first national workshop in that year bringing together students from secondary schools across the state where we taught them on environmental consciousness and research methods.

By 2015, the Network for Future Geographers merged with the International Association of Young Geographers and became the African Division of the movement. Our focus became broader to include environmental awareness, climate change, waste management and improvement in the student’s enrollment of geography. In March 2017, I was promoted to the position of Deputy Director, recruitment and expansion of the IAYG West African region, a position that requires me to travel, meet and strategize on the expansion of geographic curriculum across Africa while also recruiting volunteers and coordinators.

Our overarching ambition remains to ensure that our environment is protected and that youths growing up should be aware of the consequences of our actions and inactions on the environment while educating on the importance of Geography. As we always say, “Without Geography, we’d be NOWHERE!”

GIS Cleric International is a geospatial services company founded by myself in the year 2012. As a geospatial scientist, I noticed the dearth of skilled GIS personnel, data for planning, useable maps and most importantly I needed to channel my creative juices into something I love doing. This led to setting up a GIS training school to cater to geospatial enthusiasts and professionals in need of affordable and in-depth training.

The consultancy aspect of the company also grew geometrically with clients such as the University of Ilorin, Kwara State University, Etisalat, and a host of Local and State governments. The company has recently delved into drone mapping and servicing with one of its core CSR hinged on providing data for poor, underserved and hard to access areas using drone imagery especially with respect to disaster risk reduction, preparation and evacuation in the light of disaster occurrences.

In December 2016, while still teaching in the University (as a consultant), I got a call from the co-founders of the Justice and Empowerment Initiatives discussing their work, how much data they collect, and the need for robust analysis, geo-presence, as well as trainings for community based volunteers. This led to my joining the organization in February 2017, in the capacity of a Mapping and Profiling Data Analyst.

My work with a justice based community legal aid organization revolved around primarily collecting data on informal settlements, slums and poor urban communities. We realized that the reason why these poor communities were often left out of the development agendas of governments was a result of the lack of credible data for use in planning for these communities. Our cardinal goal as a profiling team focused on collecting data on communities ranging from settlement profiles, boundaries, house numbering as well as household enumeration of the residents of the communities. As an analyst, I routinely analyze the data collected with the aim of using the data and information to advocate with the Central Government and international donor agencies on inclusive development and most recently insitu upgrade of slum / informal communities as an alternative to forced evictions.

While working on my Master`s Degree, I worked on climate change and adaptive land use in Ilorin, an urban environment in the North Central region of Nigeria. This research exposed me to the challenges locals and poor communities face in light of climate change. While they have little or no access to/understanding of scientific lingo and findings on climate issues, they are usually treated as pawns of the governments in their bids to score points in the international fronts as fighting and mitigating against climate change. What this portends eventually is that it leaves these poor individuals on the edge of double impacts. On the one side, impacted adversely by climate related issues such as floods, droughts, low crop yield amongst others; on the other side, they are affected by poorly thought out/non-inclusive climate policies that further alienate the individuals from the sources of their livelihoods.

In April 2017, the Lagos state government in Nigeria sanctioned the forced eviction of a 30,000 people strong community, citing excuses ranging from trying to protect the community against disasters such as flood incidences, to security issues, as well as sanitation issues. In the end, 11 people lost their lives while the remaining 5000+ households lost their livelihoods.

In my work with Justice and Empowerment Initiatives, we have identified a host of communities who face threats to their communities as a result of coastal erosion, flooding, as well as poor government actions (primarily forced evictions). In addition, we are working to bring relevant actors, stakeholders, and government to the table to chart a new all-inclusive (participatory) approach to climate change mitigation, adaptation and community upgrade.

While advocating for climate justice in my personal capacity to ensure poor and indigenous communities get their voices on the table when policies and action plans are to be drawn, my work with JEI as a human rights advocate has broadened the scope of my engagements, exposing me to the ills being meted out to poor indigenous communities in the urban fringes at the risk of climate change, forced evictions and poor government plans on mitigating/ alleviating climate related hazards.

As a geospatial scientist and data analyst, I have brought my skillsets to the table as a means of telling the stories of climate change, the community experience/vulnerabilities and adaptive capacities of the poor often left to the impacts of climate change and development policies. I analyse the vulnerability of communities to risk using satellite images (to analyse flood events, potentials and extent, predict drought, measure deforestation, coastal erosion etc.). Meteorological data (to predict and analyze rainfall regimes, temperature surges, urban heat island effects and land surface temperature amongst others). Community profiles (to ascertain boundary, demographics, income structure, household size and estimated populations of communities at risk etc.).

At the moment, myself and a couple of colleagues have started a drive to enroll 100 kids from the slums into schools. We are also organizing a street store event where donated items of clothing, beddings and food items are purchased (without paying any money) by the slum dwellers in a replica shopping center set up. The next event of the street store will be held on the October 27, 2018 in Lagos, Nigeria.

HI² -- How is sustainable development related to human rights activism? Expand on how your work in this field aims to advance advocacy and development practices.

Almost all forms of development comes at an incredible human cost! Sometimes in the form of the loss of lives, other times, loss of livelihood and yet some other times, a combination of both. Sustainable development is majorly premised upon incremental development that takes into cognizance of the future while improving on the present. As human rights activists, we understand the need for development to be inclusive and sustainable. Hence our incessant drive to ensure development partners (governments, private sectors, etc.) pays attention to developing not just infrastructures and economies, but also pays equal attention to human capital development by improving on the livelihood of the citizens and reducing the inequality gap that is ever widening.

One of the major challenges we have faced as a justice based organization dedicated to improving lives and ensuring justice for poor urban dwellers is the level of institutionalized discrimination that exists. Most of the human right abuses we take up (as highlighted below), are facilitated by government and powerful corporations and individuals.

Lagos, in its bid to become a mega city, has decided to sacrifice its inhabitants on the altar of such ambition. Huge clampdown on poor people via banning of their street trade, demolition of poor neighbourhoods to resell to wealthy individuals/corporations without recourse to the fact that evicting one community will lead to increase of about 5 more slums.

Moreover, for development to be sustainable, it must take into cognizance the people for which the development is intended; make them a part of the process, for only then can they ensure its success, alternatives to unsustainable development practices must also be put into account.

As a result of our activism, the Lagos urban renewal agency (LASURA) partnered with our organization and three communities we advocate for to engage in the communities and carry out the first ever insitu slum upgrade in the state. The process for engagement is fully participatory, with the community members fully integrated into the planning process as well as all through the execution. It is gearing up to becoming a model for inclusive / participatory urban development. Our advocacy has also committed huge resources to providing biofuel toilets in over 16 slum communities in Lagos. The aim is to aid in sanitation and health development in the communities.

Summarily, sustainable development need not come at the cost of human lives, properties and livelihoods but can be all inclusive, participatory and futuristic. In addition, for this to happen, governments and development partners must understand the place of the people (especially the poor and underserved) in the process.

HI² -- Can you tell us a little bit about your work with the NGO Justice Empowerment Initiatives on advancing human rights in Nigeria? What kind of projects are you working on?

Justice Empowerment Initiatives (JEI) is a justice based, community oriented human rights organization based in Lagos and Port Harcourt, Nigeria. Two Americans, Megan Chapman and Andrew Maki founded the organization with the view to empowering poor and marginalized individuals and communities to access justice based solutions while also mobilizing the community members to take responsibility for the change they would love to see in their society. The organization is women-led and is modelled after the slum dweller international`s approach to slum redevelopment and community upgrade.

As the mapping and profiling data analyst for the organization, my responsibilities revolve around working with the Nigerian Slum/Informal Settlement Federation’s mapping and profiling teams to strengthen community profiling, mapping, and enumeration processes to ensure consistency and accuracy of data, timely data capture, and regular data review and creation of mapping and data outputs. I also currently lead the technical team working towards upgrading three slums in Lagos, Nigeria.