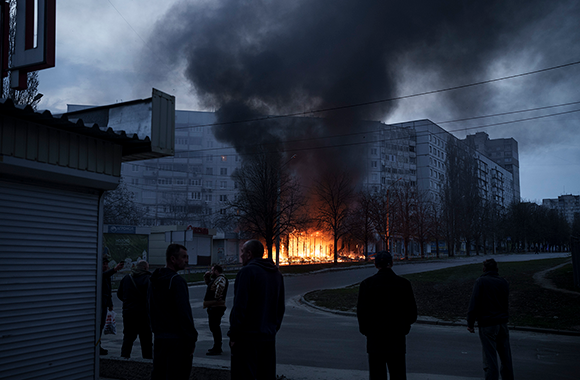 Join the next Crisis Seminar on the Invasion of Ukraine this Thursday, April 14 at 4:30 p.m.

On February 15, as Russian troops amassed at the border with Ukraine were engaging in what Russian President Putin was still downplaying as “military drills,” the Watson Institute held its first Crisis Seminar on the Invasion of Ukraine. Since then, the seminar – a group discussion open to all students, faculty, and staff – has become a weekly event featuring visiting experts, including Nikolas K. Gvosdev, professor of national security affairs at the U.S. Naval War College and an expert on Russian defense policy; Anthony Levitas, senior fellow in international and public affairs at the Watson Institute; and Professor David Dusseault of Russia’s Tyumen University. It is hosted by Visiting Professor Lyle Goldstein, an expert on Chinese and Russian military strategic development.

“We are all shocked and saddened by Russia's invasion of Ukraine,” says Goldstein. “Journalists, political leaders, relief workers, soldiers, and activists all have a definite role to play, but so do scholars. I have set up this forum so that concerned Brown students and faculty could gather on a regular basis to share ideas and expertise. The intense weekly discussion, which was inaugurated before the war started, helps each of us gain deeper understanding and also seek remedies for this on-going tragedy.”

The seminar is complemented by lectures in Watson’s War in Ukraine series, the first of which was held on February 16. That event featured an expert panel comprising Volodymyr Ishchenko, of Berlin’s Freie University; Theresa Fallon, of the Brussels-based Centre for Russia Europe and Asia Studies; and Dmitry Suslov, of the Center for the Comprehensive European and International Studies at the National Research University Higher School of Economics in Moscow. Moderated by Goldstein, the scholars offered the Ukrainian, European, and Russian points of view, respectively.

As part of the series, in March Ieva Jusionyte, Watson Family Associate Professor of International Security and Anthropology and a native Lithuanian, moderated a panel of Brown University experts that included Omer Bartov, John P. Birkelund Distinguished Professor of European History; Anna Lysyanskaya, professor of computer science; Adam Levine, director of Watson’s Center for Human Rights and Humanitarian Studies; and Michael Kennedy, professor of sociology and international and public affairs, among others.

In April, Nicolai N. Petro, professor of political science at the University of Rhode Island and formerly the Silvia-Chandley Professor of Peace Studies and Nonviolence there, delivered a talk titled “Prospects for Peace in Ukraine: The Non-Military Aspect.” In it, he noted that envisioning the future in Ukraine could entail establishing a Ukrainian Truth and Reconciliation Commission (TLC), not unlike South Africa’s.

“All successful models of TLC have one thing in common—they begin with an interim, often imperfect, peace settlement,” Petro said in his talk. “This lull in hostilities creates an opportunity for cooler heads to emerge who, over time, forge longer-term solutions. Forgiveness and compassion require a calm social space, where hatred can give way to true dialogue, and the healing of society can begin.”

Also in April, Michael Glennon, professor of constitutional law at the Fletcher School at Tufts University and a legal scholar with practical experience as counsel to the US Senate and the Senate Foreign Relations Committee, will speak about the role of NATO. Ira Helfand, MD, a member of the International Steering Group of the International Campaign to Abolish Nuclear Weapon and the recipient of the 2017 Nobel Peace Prize, and Michael Klare, professor emeritus of peace and world security studies and director of the Five College Program in Peace and World Security Studies, will discuss the possibility of nuclear war and the movement to abolish nuclear weapons.