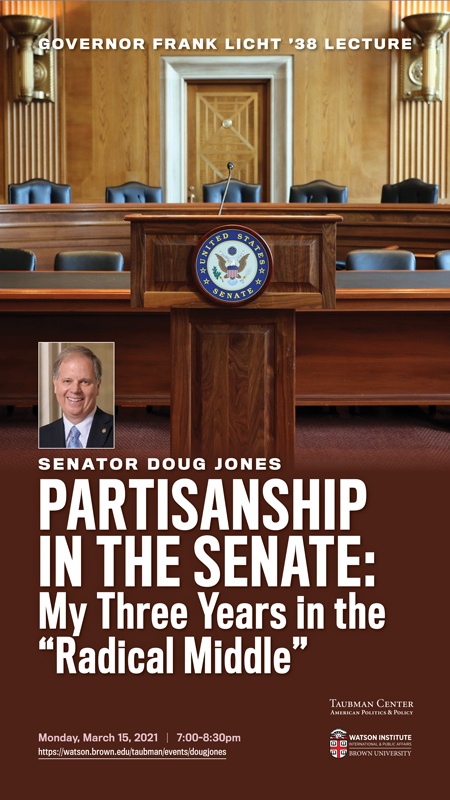 Former U.S. Senator Doug Jones of Alabama will be the Governor Frank Licht ’38 Lecturer this year. He began his Senate career as staff counsel to the Senate Judiciary Committee for Senator Howell Heflin (D-AL). In 1980, he became an Assistant U.S. Attorney in Birmingham. Beginning in 1997, Sen. Jones was nominated as the U.S. Attorney for the Northern District of Alabama by President Bill Clinton and confirmed by a Republican-led Senate.

Currently, Senator Jones is a Politics Fellow at the Institute of Politics and Public Service at Georgetown University’s McCourt School of Public Policy and a commentator at CNN.

In 2017, Jones won a special election defeating Roy Moore for the seat vacated by then-Attorney General Jeff Sessions making him the first Democrat to win a Senate seat from Alabama since 1992. This victory was accomplished in "ruby red" Alabama which Donald Trump carried by 28 percentage points in 2016.

Jones was best known for his successful prosecution of two Ku Klux Klansmen who bombed the 16th Street Baptist Church in 1963.

He was defeated for re-election to the Senate this past November by former Auburn University football coach Tommy Tuberville.

During Jones’s short three year career in the Senate he was consistently considered one of the most bipartisan senators and authored 23 bipartisan pieces of legislation that were signed into law. His tenure was also marked by difficult principled votes which he cast against Supreme Court Justices Brett Kavanaugh and Amy Coney Barrett and in favor of removing President Donald Trump from office during the impeachment trial in 2020.

He will discuss his years in public service, his hopes for the future, and his search for common-sense bipartisan problem solving to bring about lasting change — what he has called "The Radical Middle."