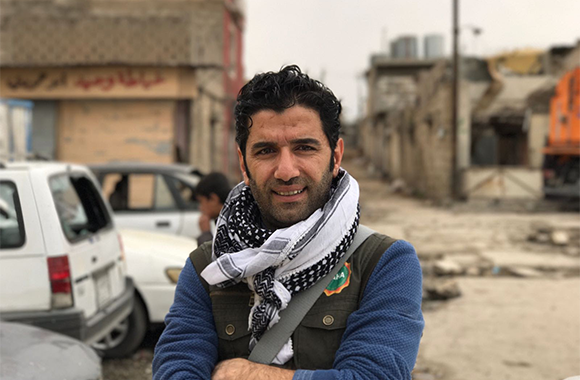 "The war zone in Ukraine seemed to me like an intensive and concentrated scene summarizing the full decade I spent working in armed conflict and enforced displacement contexts...It is critical that we apply all lessons learned from other armed conflicts to improve the humanitarian response in Ukraine."

Perspective from the Ground: Humanitarian Situation in Ukraine

I understand you are currently responding to the humanitarian crisis in Ukraine with the organization Global Response Management. What type of response operations are you involved with and what is the humanitarian situation like from your perspective on the ground?

Soon after Russia launched its invasion on February 24, 2022, Ukraine galvanized humanitarian aid workers from across the globe. As a Syrian physician, humanitarian, and refugee, who has suffered from the atrocities of Assad’s dictatorship and from the failure of the international community in Syria, my decision to engage in the humanitarian efforts in Ukraine was already made.

As a humanitarian operations consultant, I joined the Global Response Management GRM, a US-based organization, with the goal to design and implement some of the most needed healthcare projects and services, including but not limited to direct medical and surgical procedures, training programs to increase the capacity of Ukrainian medical providers, and medical evacuation services, and others. Similar to other humanitarian partners, we run our operations from Poland and from Ukraine, with a long-term goal to expand the presence of GRM in Ukraine, particularly in and close to the hot areas.

Despite the unprecedented global mobilization and solidarity shown to respond to the unfolding humanitarian crisis in Ukraine, the vulnerability and fragility in this country are still challenging and increasing, particularly with the heavy political and security catalysts of this war. In less than two months,  Russia’s invitation has impacted up to 24 million persons and uprooted around 13 million civilians from their homes. Also, the terrible scenes of destruction spilling out from the frontlines reflect the ferocity and brutality on the battlefield. What has unfolded from the humanitarian catastrophe in Ukraine could be but the tip of the iceberg, and the worst is yet to come.

From the very first day of my mission, it was apparent that this war is quite different. Despite the sense of “normal life” in the western and central regions, including the city of Lviv on the Polish borders, the persistent roar of sirens kept reminding us that there are safe zones for humanitarian operations in Ukraine, as far as the Russian fighter jets and missiles dominate its sky. The Russian destructive capacity is massive and seemingly has no taboos. The Russian army has hit targets from the sky, sea, and ground within a range of hundreds of kilometers, not to mention the capability to utilize hypersonic missiles, and thermobaric and chemical weapons.

Over the first few weeks of the invasion, the Russian military machine has deliberately and massively targeted homes, healthcare facilities, schools, roads, bridges, water and electricity facilities, and other vital infrastructures. In the immediate run, this destruction has significantly hampered the delivery of humanitarian aid to the most vulnerable population. The Russian strategy could be understood as a tactic to turn Ukraine into a fragile or failed state and burden the post-war country for years to come, not only economically, but also with hard-to-heal wounds when it comes to social cohesion and resilience.

Are you able to shed some light on the current state of healthcare services and infrastructure in the war affected areas of Ukraine at the moment?

The healthcare facilities I visited were well staffed and well prepared to absorb influxes of patients or injuries if the situation deteriorated. However, local medical providers lack the experience to manage the complex injuries presented to their facilities. Much medical personnel across the country are particularly concerned about the possible attacks with chemical weapons.

Similar to other armed conflicts, military attacks have not spared healthcare facilities. In the first two months of this war, WHO has reported 186 attacks on healthcare facilities and hospitals which have claimed 73 lives. However, the Ukrainian Ministry of Health has reported more than 300 military attacks on its healthcare facilities. These attacks are exerting considerable pressure on the health system, in the short, and long term. Attacks on the delivery of healthcare in Ukraine will jeopardize countless lives, not only by preventing and complicating time-sensitive treatment of severe wounds but also by disrupting safe access to diagnostic services and treatments for heart diseases, cancer, diabetes, and other chronic and infectious diseases. Indeed, Ukraine has one of the world’s highest burdens of multidrug-resistant (MDR) tuberculosis TB; an estimated 32,000 people develop active infection each year

Is there anything else that you would like to share? Are there aspects of the humanitarian situation in Ukraine that you feel are not getting the attention they deserve?

The war zone in Ukraine seemed to me like an intensive and concentrated scene summarizing the full decade I spent working in armed conflict and enforced displacement contexts.  Although the dynamics of war in Ukraine differ from Syria, Iraq, and Yemen, the resulting humanitarian crises bear many similarities. It is critical that we apply all lessons learned from other armed conflicts to improve the humanitarian response in Ukraine.

The war in Ukraine provides another rare moment for the international community to refine its actions, procedures, and policies. Advocating for the protection of civilians and public infrastructures alone is not enough. Decisive actions are urgently required. Holding perpetrators and war criminals accountable in Ukraine will give some hope to millions of war atrocities victims and survivors.