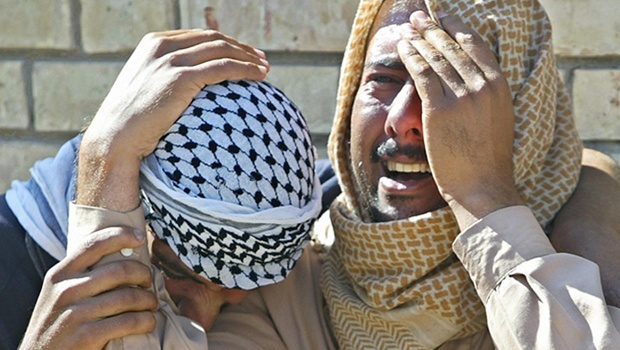 Iraqi men mourn a relative, likely the victim of sectarian killing, who was found shot dead with 14 other people in May 2005. Witnesses reported seeing the men being arrested by interior ministry commandos at a market near Baghdad before being driven away. (AFT PHOTO/ALIAL-Saddi/AFP/Getty Images)

No one knows with certainty how many people have been killed and wounded in Iraq since the 2003 United States invasion. However, we know that between 184,382 and 207,156 civilians have died from direct war related violence caused by the U.S., its allies, the Iraqi military and police, and opposition forces from the time of the invasion through October 2019. The violent deaths of Iraqi civilians have occurred through aerial bombing, shelling, gunshots, suicide attacks, and fires started by bombing. Many civilians have also been injured.

Because not all war-related deaths have been recorded accurately by the Iraqi government and the U.S.-led coalition, the numbers are likely much higher. Several estimates based on randomly selected household surveys place the total death count among Iraqis in the hundreds of thousands.

Several times as many Iraqi civilians may have died as an indirect result of the war, due to damage to the systems that provide food, health care and clean drinking water, and as a result, illness, infectious diseases, and malnutrition that could otherwise have been avoided or treated.  The war has compounded the ill effects of decades of harmful U.S. policy actions towards Iraq since the 1960s, including economic sanctions in the 1990s that were devastating for Iraqis.

Despite more than $100 billion committed to aiding and reconstructing Iraq, many parts of the country still suffer from lack of access to clean drinking water and housing.

War Related Death, Injury and Displacement in Afghanistan and Pakistan 2001-2014