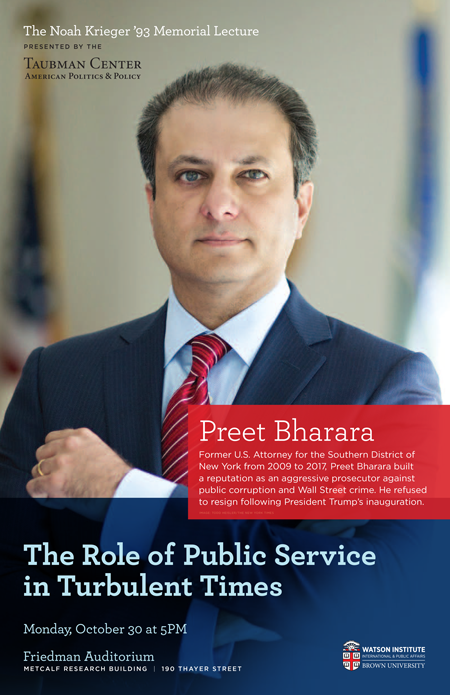 Preet Bharara is an American lawyer who served for seven and a half years as U.S. Attorney for the Southern District of New York from 2009 to 2017. As U.S. Attorney, Bharara oversaw the investigation and litigation of all criminal and civil cases brought on behalf of the United States in the Southern District of New York. He supervised an office of more than 200 Assistant U.S. Attorneys, who handled a high volume of cases involving terrorism, narcotics and arms trafficking, financial and healthcare fraud, cybercrime, public corruption, gang violence, organized crime, and civil rights violations.

In 2012, Bharara was featured on the cover of TIME magazine and its list, “100 Most Influential People in the World.” From 2012 to 2016, Bharara was also included in Vanity Fair’s “New Establishment lists,” Worth magazine’s “The Power 100: The 100 Most Powerful People in Finance,” included in Bloomberg Markets “50 Most Influential” list in 2014. The New York Times dubbed Bharara as one of “the nation’s most aggressive and outspoken prosecutors. Bharara has used his voice to advocate for justice, against corruption and in support of public service. He has penned opinion pieces for the New York Times and Washington Post and is a sought-after speaker on a range of issues.

On April 1, 2017, Bharara joined the NYU School of Law faculty as a Distinguished Scholar in Residence. He is also the Executive Vice President of Some Spider Studios, where he hosts a CAFE podcast focusing on issues of justice and fairness.