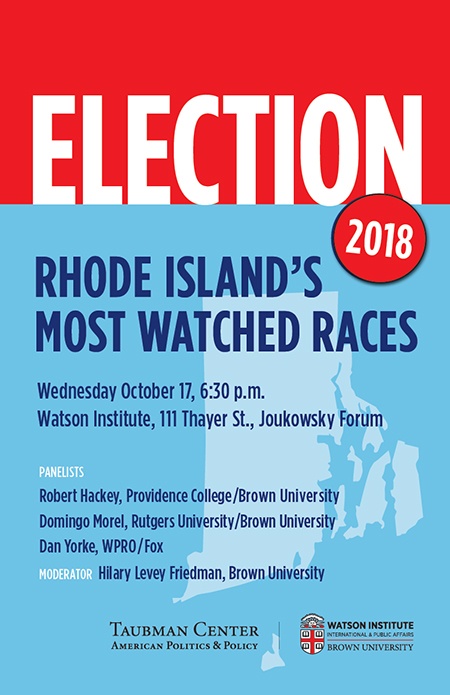 Topics include the view of the Rhode Island political landscape, examination of key races, an overview of Rhode Island in the national context, and a discussion of crucial issues facing Rhode Island this year.

Bob Hackey is a professor of Health Policy and Management at Providence College. In 2008, he was selected as the Carnegie/CASE Professor of the Year for the State of RI. He received his BA in economics and political science from the University of Rhode Island in 1987, and completed his PhD in political science at Brown University in 1992. He is the author of Cries of Crisis: Rethinking the Health Care Debate (Nevada, 2012) and The New Politics of State Health Policy (Georgetown, 1997), and the co-editor of Rethinking Health Care Policy: The New Politics of State Regulation (Kansas, 2001). A past president of the Northeast Popular Culture Association, Hackey’s work on the impact of culture in shaping policy debates and the uses of theater to raise awareness of significant social issues was published by Journal of Popular Culture and Didaskalia: The Journal of Ancient Performance. His current research focuses on state-level implementation of the Affordable Care Act.

Domingo Morel is a 2018-2019 Visiting Scholar at the Annenberg Institute for School Reform and an affiliate with the Taubman Center for American Politics and Policy at Brown University. His research program and teaching portfolio focus on racial and ethnic politics, urban politics, education politics and public policy. Specifically, his research explores the ways state policies help expand or diminish political inequality among historically marginalized populations. He is the author of Takeover: Race, Education, and American Democracy (Oxford University Press, 2018) and co-editor of Latino Mayors: Power and Political Change in the Postindustrial City (Temple University Press, 2018). He is the co-founder and co-chair of the Latino Policy Institute at Roger Williams University. He received his Ph.D. in political science from Brown University in 2014.

Dan Yorke is a PM Drive host at Newstalk 99.7FM and AM630 WPRO. He is also the host of Dan Yorke State of Mind, a television program which airs twice each weekday evening. He is a 1983 graduate of the University of Dayton.

Hilary Levey Friedman is a sociologist and expert on beauty pageants, childhood and parenting, competitive afterschool activities, and popular culture who teaches courses in the Department of Education at Brown University (where she is also an Affiliate of the Taubman Center for American Politics and Policy). She holds degrees from Harvard University, Princeton University, and the University of Cambridge.