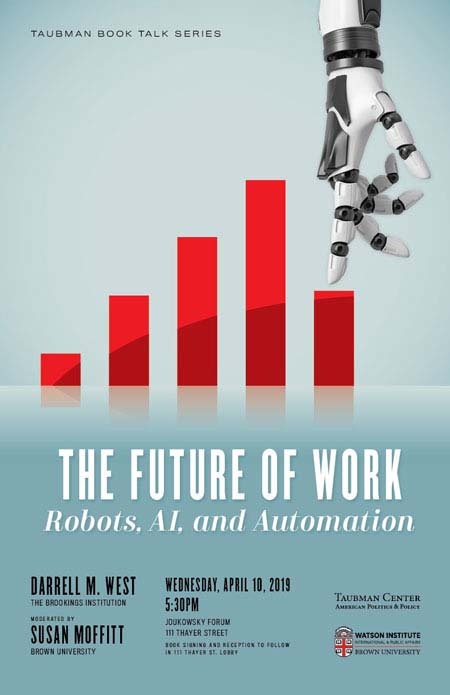 Robots, artificial intelligence, and driverless cars no longer represent things of the future. They are with us and will become common in coming years, along with virtual reality and digital assistants. As these tools advance deeper into everyday use, they raise the question—how will they transform society, the economy, and politics?

In this talk, Darrell M. West will discuss his newest book The Future of Work: Robots, AI, and Automation, and the need to rethink the concept of jobs, reconfigure the social contract, move toward a system of lifetime learning, and develop a new kind of politics that can deal with economic dislocations. He will cover a number of proposals to help people deal with the transition from an industrial to a digital economy. This includes creating new forms of job identity, emphasizing leisure activities in the arts, music, and culture, and making fundamental political reforms.

Dr. West feels that it is vital to address these issues in order to avoid widespread economic and political disruption.

Moderated by: Susan Moffitt, Director of the Taubman Center for American Politics and Policy

Darrell M. West is the Vice President of Governance Studies and Director of the Center for Technology Innovation at the Brookings Institution. He holds the Douglas Dillon Chair in Governance Studies. His current research focuses on workforce issues, technology policy, artificial intelligence, and data analytics.

His books have been translated into Chinese, Japanese, and Korean, and he has delivered nearly 150 lectures in a dozen different countries. He has been quoted in leading newspapers, radio stations, and national television networks around the world.