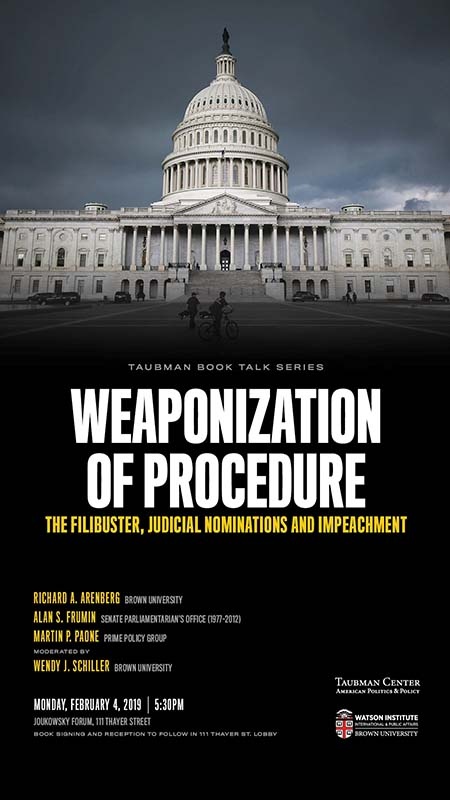 Book signing and reception to follow in 111 Thayer St. Lobby

Richard A. Arenberg, Alan S. Frumin, and Martin P. Paone will discuss the use and abuse of rules, precedents, and procedures to gain partisan advantage in the hyper-polarized U.S. Congress. The panelists who each have decades of experience on Capitol Hill will use Professor Arenberg's new book Congressional Procedure: A Practical Guide to the Legislative Process in the U.S. Congress as a starting point for the conversation.

Current controversies regarding impeachment hearings, the state of the Senate's judicial confirmation process, and the on-going debate over the reform of the filibuster rules will be highlighted.

The panel will be moderated by Brown Political Science Chair Wendy J. Schiller.

Richard A. Arenberg is Visiting Professor of the Practice of Political Science and a Senior Fellow in International and Public Affairs at Brown. He is an affiliate at the Taubman Center for American Politics & Policy. He worked for Sens. Paul Tsongas (D-MA), Carl Levin (D-MI), and Majority Leader George Mitchell (D-ME) for 34 years. He served on the Senate Iran-Contra Committee in 1987.

In addition to Congressional Procedure: A Practical Guide to the Legislative Process in the U.S. Congress, Arenberg is co-author of the award-winning, Defending the Filibuster: Soul of the Senate, named “Book of the Year in Political Science” by Foreword Reviews in 2012. A second edition was published in 2014. The U.S. Senate Historical Office published Richard A. Arenberg: Oral History Interviews in 2011 which can be accessed on the U.S. Senate website.

He serves on the Board of Directors of Social Security Works and the Social Security Education Fund. His work has appeared in The New York Times, The Washington Post, The Providence Journal, Politico, and The Boston Globe. He is a Contributor at Newsmaxand The Hill. Arenberg holds bachelor’s and master’s degrees from Boston University.

Alan S. Frumin is a 1968 graduate of Colgate University and a 1971 graduate of the Georgetown University Law Center. His entire career has been devoted to giving non-partisan, authoritative Congressional procedural advice to generations of Senators, Senate staffs, and others interested in the workings of Congress. He began his Capitol Hill career in 1974 by participating in the editing of Deschler's Precedents of the House of Representatives (the official authoritative compilation of the precedents of the House).

He received significant media coverage during the 2010 healthcare reform debate for the critical role he played in determining the validity of every aspect of Senate procedure affecting the consideration of the Affordable Care Act.

Since his retirement in 2012, he has been a guest lecturer at several universities. He has also lectured scores of federal employees. He served on the Content Advisory Committee during the establishment of the Edward M. Kennedy Institute for the United States Senate, and continues to serve as a consultant to the Institute. He has also appeared on CNN, Fox News, and MSNBC.

He is the editor of Riddick's Senate Procedure (1992), the official authoritative compilation of Senate precedents.

Martin P. Paone is a Senior Advisor at Prime Policy Group having rejoined the firm after a two-year hiatus spent working for President Obama as his Deputy Assistant for Legislative Affairs and Senate Liaison. Marty served on Capitol Hill for 32 years before joining the firm in 2008. He graduated from Boston College with a Bachelor’s degree in Economics and Philosophy and later earned a Master’s degree in Russian Area Studies from Georgetown University.

After joining President Obama’s Legislative Affairs staff, Marty led the office of Senate Liaison. While serving in the Executive Branch, he worked closely with the bipartisan Senate Leadership to advance the President’s agenda.

Widely regarded as an expert in the oftentimes complicated Senate procedure, Marty served as an advisor to the show “House of Cards,” working on the set and with the writers in 2013.

From 2009-2015 Marty served as an Adjunct Professor at the College of William and Mary.