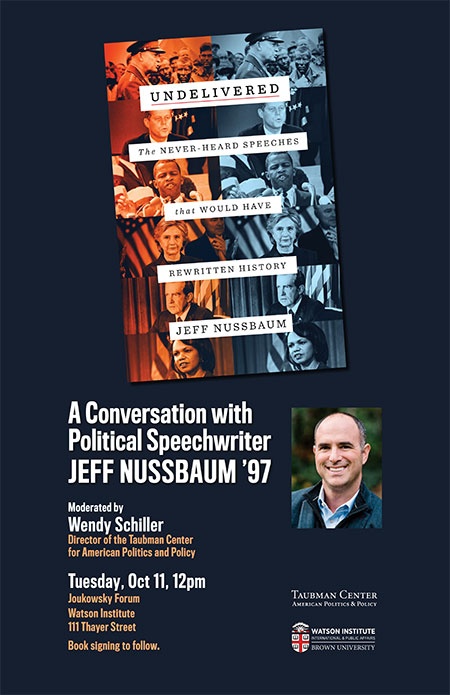 Join Taubman Center director Wendy Schiller for a conversation with Jeff Nussbaum '97, former speechwriter for President Joe Biden and author of Undelivered: The Never-Heard Speeches That Would Have Rewritten History. They'll discuss the book, and Nussbaum's career path, from Brown Political Science and Public Policy concentrator to political speechwriter and author.

For almost every delivered speech, there exists an undelivered opposite. These "second speeches" provide alternative histories of what could have been if not for schedule changes, changes of heart, or momentous turns of events.

In Undelivered, political speechwriter Jeff Nussbaum presents the most notable speeches the public never heard, from Dwight Eisenhower’s apology for a D-Day failure to Richard Nixon’s refusal to resign the presidency, and even Hillary Clinton’s acceptance for a 2016 victory—the latter never seen until now.

Examining the content of these speeches and the context of the historic moments that almost came to be, Nussbaum considers not only what they tell us about the past but also what they can inform us about our present.

Jeff Nussbaum is the author of Undelivered: The Never-Heard Speeches that Would Have Rewritten History. He most recently served as a special assistant and senior speechwriter to President Joe Biden. Prior to that, he was a partner at the speechwriting and strategy firm West Wing Writers. He traveled with President Biden during the 2008 Obama-Biden campaign and previously wrote for Vice President Al Gore and Senate Majority Leader Tom Daschle. Nussbaum helped oversee speechwriting operations for the 2020 Democratic National Convention and was involved in the past six Democratic conventions. Nussbaum has co-authored books with James Carville and former Senator Bob Graham and has served as a creative consultant for the Kennedy Center Mark Twain Prize for American Humor.