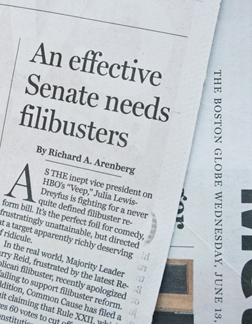 Professor Richard Arenberg, expert on Senate rules and Adjunct Professor in Public Policy at the Taubman Center had an opinion piece published in the June 13, 2012 edition of the Boston Globe. Arenberg wrote in support of the filibuster as essential element of Senate procedure. "What we have seen in recent years is bad behavior, no doubt, wrote Arenberg, “But the solution for partisan bad behavior is not rewriting the Senate rules."

His Globe piece was selected by the Atlantic Wire as one of the “Five Best Wednesday Columns” and was selected for the June 14 edition of USA Today’s “Fresh Views.”  Arenberg was also featured on Louise Schiavone’s  June 8 “Press Pool,” on Sirius/XM radio’s P.O.T.U.S. channel.

Arenberg will be a guest on NPR's Diane Rehm Show on Thursday June 21 to discuss the filibuster issue.

Defending the Filibuster: The Soul of the Senate by Richard A. Arenberg and Robert B. Dove will be published by Indiana University Press on September 7, 2012.