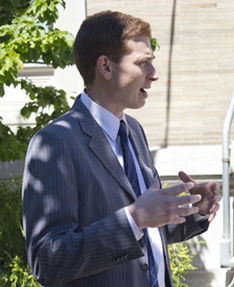 Aaron Hertzberg, a current student in the Taubman Center’s master of public affairs program, has been named the executive director of the Pawtucket Foundation, a nonprofit organization that advocates for downtown, riverfront and transportation improvements for the city of Pawtucket.

Hertzberg, who had been program director at the local nonprofit since 2008, was promoted to the executive director position by the organization’s board of directors this month.

Hertzberg said the Pawtucket Foundation would continue to help the city identify funding for a number of improvement projects including a plan to redesign downtown traffic patterns to smooth the flow of Pawtucket’s tangle of one-way streets. The city is also in the midst of a plan to develop the Blackstone Valley riverfront corridor with neighboring Central Falls.

Pawtucket’s wealth of historic buildings remains its greatest asset, said Hertzberg. “We’ve got some fantastic historic structures. When buildings have been rehabbed, people have followed. Almost a thousand new residents moved to the downtown within the last ten years through mill conversion projects.”

Much of the work he’s been involved with in the past four years is beginning to bear fruit, said Hertzberg. He has been part of the Pawtucket Foundation’s marketing strategy to draw new residents and businesses to the city. The Pawtucket Foundation partnered with Embolden, a local agency, to create experiencepawtucket.org, the centerpiece of the marketing plan. The site, which launched a year ago, recently won an award from the Rhode Island chapter of the American Planning Association.

Another initiative Hertzberg is particularly excited about is supporting the city’s efforts to attract more culinary businesses to Pawtucket. The city is already home to Farm Fresh Rhode Island and New Urban Farmers, local leaders in the ultra-hot urban farming and farm-to-table movements.

Hertzberg will continue to juggle coursework and his new job until this May, when he expects to complete his master of public affairs degree. The Taubman MPA program has given him a solid grounding for his new role as the director of the Pawtucket Foundation, he said. “I’ve reflected back to Pete Marino’s class in [Public Budgeting and Management] on many occasions,” said Hertzberg.