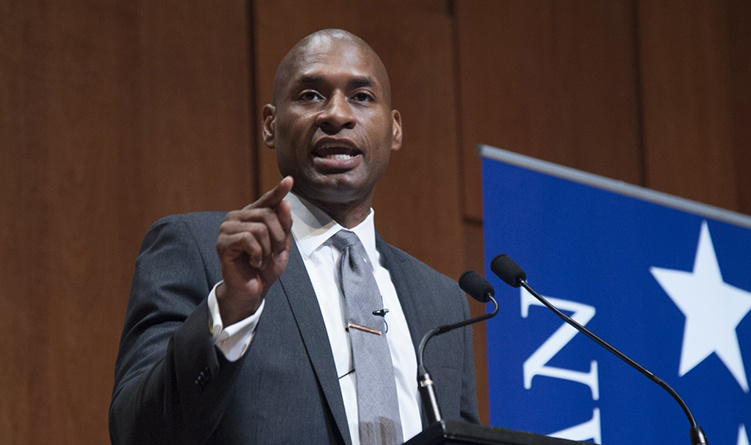 On September 17, the Taubman Center for American Politics and Policy presented Charles Blow, a New York Times op-ed columnist who writes weekly on issues including race relations, social justice, gender equity, and presidential politics. Blow was this year’s John Hazen White, Sr. lecturer. Blow presented his talk, titled “The New Civil Rights Movement,” to a sold-out crowd at the Salomon Center, and received two standing ovations after his speech and Q&A session. Blow’s comments centered on the strong historical roots of Black Lives Matter, transitioning to a new generation of civil rights activists, and the productiveness of rage born from oppression. However, he also touched on many topics to do with race, politics, and civil rights.

On the spectacle of Donald Trump:
“We can create news just by sheer volume of coverage. And then we will cover the news that we created... that is very close to journalistic malpractice… if this man can just go out there every morning and call up a newspaper, and he gets to be on for twenty minutes, saying pretty much nothing, then that becomes free publicity… that is more publicity than he would ever be willing to purchase… a large part of what we see as people buying into Trump, is because we [journalists] have supported a demagogue. And we should be ashamed of that.”

On Stop and Frisk, and the legacy of racism in the northern states:
“The South is not a part of this [recent epidemic of police brutality], unless you assume that the Sandra Bland case was a part of this phenomenon... the South is old in terms of race relations... the North and urban environments are just now getting to the point where you see city after city, year after year, becoming majority minority. And you see those cities, which operated as though they had really small number of minority populations, always saying, ‘oh, we love diversity.’ Until it comes knocking on our door. Until I feel unsafe in my community because there are brown faces all around. And all of a sudden, you embrace the most vicious police practices you could imagine.

Stop and Frisk wasn’t happening in Mobile, Alabama— it was happening in New York City. At its height, there were more black and brown young men stopped and frisked in New York City than there wereyoung men that lived in New York City. That means if my kids weren’t taken and stopped and frisked, then someone was taking one for them. Or two. And every year that the citizens of New York City were asked whether they thought this policy was okay, a majority of the white citizens always said ‘yes.’ They had no skin in the game, and they were afraid. Because they could talk the game, but they didn’t want to live it.”

On claims that Black Lives Matter is a hate group:
“This movement is experiencing exactly what the previous civil rights movement experienced. Demonization, and a concerted effort to defame and damage... demanding police fairness, oversight and accountability is not the same as promoting police hatred or harm. I overheard one television commenter compare the movement to the Klu Klux Klan. The Klan! The Klan is one of the most effective, most violent, most deadly domestic terrorism organizations this country has ever produced, and their active reign of terror stretched for nearly a century. No one who has ever even breathed on a history book could make such a claim.”

On passing the torch of activism:
“[Older generations must] bequeath this new generation of civil rights activists with the gifts of their wisdom and the lessons of their struggle, while also respecting that this is a new movement. That their movement, their tactics and tenor, will be different than yours… this is their civil rights movement. This is their experiential moment… that moment when consciousness is raised, and the unwavering optimism falls, when the jagged slope of truth replaces the soft slope of fantasy… when we realize that fighting is the only way forward. That equality must be won by every generation, because it will never be freely granted…

Yes, [Black Lives Matter] is struggling to define the most effective way forward, but they will not accept being dragged backward. It is a profound moment, to which we should gladly bear witness. It is a moment in which they need our help. But you have to meet them on their turf and speak their language… You can’t talk to a person born twenty years ago who’s protesting a death that occurred one year ago about you did something fifty years ago, and [expect] that is sufficient. They speak a different language.

On Millennials’ relationship to institutions:
“The Civil Rights Movement became synonymous with Martin Luther King’s ‘dream.’ This new movement often references its ‘awakening.’ An awakening from the gauzy illusions of faith and institutional competence. Millennials shun institutions; they are suspicious of institutions... these young people grew up with the government that led — indeed, lied — the country into its current war. They grew up with a sprawl of Catholic Church sex abuse scandals. They grew up with politicians being forced to resign because of personal scandals. They now know that the government ran enormous surveillance operations to spy on other Americans. They have lived with the moral disaster that is Guantanamo Bay. They watched as government ineptitude had allowed hundreds of people to die in New Orleans after Hurricane Katrina. They have grown up with communities sucked dry of fathers and brothers and sons by mass incarceration. And they have grown up with parents who felt they had to imbue them with a sense of value while the world and its institutions endeavored to imbue them with a sense of worthlessness. Basic survival skills for escaping a police encounter with their very lives.”

On the limits of nonviolence:
“Whereas King often spoke of love, activists often speak of rage… we can’t laterally condemn violent revolt while ignoring the violent revolts that littered this country’s history. This country started as an act of revolt. Nonviolence as a strategy hinges on faith. It is faith in the ultimate moral rectitude and the perfectibility of systems of power… people who feel no investment in systems of power, don’t believe they have access to that power, and don’t believe that that power will treat them fairly, are the ones most likely to attack those systems with every power they think they possess…

King is not the only one worth quoting. There is also the quote, often attributed to Zorah Neale Hurston, that I believe summarizes the feeling of these activists at this moment. ‘If you are silent about your pain, they will kill you and say that you enjoyed it.’”