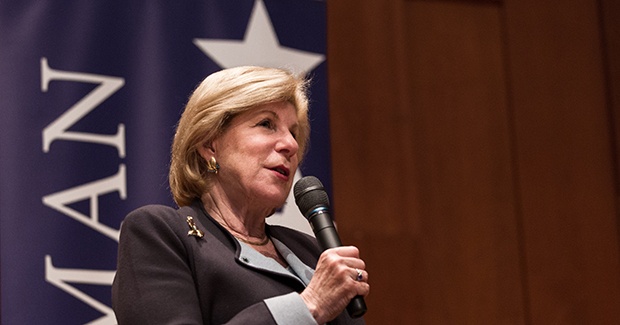 Nina Totenberg, award-winning legal correspondent for National Public Radio, recently spoke about the Supreme Court, reflecting on forty years of reporting on the pinnacle of the American legal system. Presented by the Taubman Center for American Politics and Policy, the October 2015 event in De Ciccio Auditorium was this year’s Alexander Meiklejohn Lecture, “in honor of the first amendment, and in honor of all the people who bring it to life in their daily work,” said James Morone, director of the Taubman Center. Morone praised Totenberg for her “direct, no-nonsense, crystal-clear reporting.”

Totenberg has been covering the court longer than any justice has served. According to Totenberg, the nature and types of cases have changed, its predictability has increased, and the court is more ideologically polarized than ever before. And with four justices over or near 80 years of age, Totenberg sees potential for the next president to have a “significant impact on the court.”

Before her presentation, Totenberg sat down for an exclusive interview with the Taubman Center, sharing her perspective on the changing dynamics of court coverage, the key to breaking newsworthy stories, and the ambiguity of justice.

A September 2015 Gallup Poll asked “Do you approve of the way the Supreme Court is handling its job?” Only 45 percent of Americans responded that they approve, compared to 61 percent approving in 2009. What do you see in this trend?
People distrust government in far greater numbers than ever before. It’s a result of Vietnam, Watergate, and lots of disillusionment since then. When I was young, people generally trusted the government —and in some ways, there might have been less reason to trust them then. They were doing all kinds of experiments with nuclear material. I’m not sure you could get away with that today, so in an odd way, the government is more intrusive but also more transparent in many ways. We know through legitimate and illegitimate means — through congressional testimony as well as through Snowden leaks — what the government does. People are just vastly, hugely distrustful of government. I always think it’s funny that they are more afraid of the government spying on them than the retailers they routinely do business with online [who are doing the same thing]. So I don’t actually think those numbers are a reflection on the court, as much as a reflection on the way people feel about government in general. The way people feel about the Supreme Court is vastly more approving than it is for any other branch of government — or for that matter, pretty much any profession. Certainly mine.

You have had an inside look at the highest level of the American justice system for forty years and have witnessed how the sausage gets made. Has there been a time when you questioned your faith in our judicial system?
I was most afraid was when there was a temporary restraining order on publication of the Pentagon Papers. It was the early 70s. I was pretty young then, and I was scared because the thought that the government could prevent something from being published was alarming. We all knew that the New York Times, who had the Pentagon Papers first, had them for weeks and was poring over them trying to keep out anything that would compromise national security. It bore no relation whatsoever to Wiki Leaks, about which I have much more mixed feelings. [Wiki Leaks] just throws everything up against a wall and sees what sticks. I know from very good sources that people’s lives have been compromised by that material.

Adam Liptak, who covers the court for the New York Times, wrote a story in 2014 suggesting that the Supreme Court is more partisan than ever before. Do you agree with his assessment?
I disagree with that. I don’t think the court is more partisan; I think it is more ideological. That may translate into partisanship. It may be a certain conservative philosophy that is much more representative of the Republican Party than Republican nominees used to be. [Supreme Court judges] were less predictable, but they also came from far different spheres of life. [Ideological lines] really started with the Reagan administration, because they wanted to be able to predict what the [Supreme Court] nominees’ views of a certain aspect of the court’s business. [The] Republicans picked lower court judges so they could see what their records were. Then it became almost an article of faith that people generally believed, Republican and Democratic. They argued, ‘We want to make sure the nominee has enough experience. So we want someone that’s been a judge.’ But if you look back at the history of the court, they weren’t all judges before they went on the court. They were governors, senators, and leading lawyers. [Only] some of them were judges. They came from all different spheres of life, and that’s not the way it is today. I think the Republicans want predictability and the Democrats salability.

In the last year, some major social issues have been considered by the Supreme Court — including cases on same-sex marriage, religion, and free speech. Is there an uptick in cases taken by the Court that are key to the social fabric of the United States?
Oh, it is definitely not that there is an uptick in the number of these cases. In fact, the percentage is miniscule. The biggest chunk of the court docket is probably criminal and business cases. De Tocqueville once said that every major issue in the US will make its way to the Supreme Court, and that’s been true for all of our history, from slavery to the rights of Native Americans to school desegregation. You name a subject that has been a major controversy, and it makes its way to the Supreme Court eventually. This court is no exception.

Vanity Fair called you “Queen of the Leaks” in 1992. You’ve leaked some major stories, from Anita Hill to the three Watergate defendants to Justice Rehnquist’s memo opposing the ERA. What’s the key to breaking major stories like these?
I always thought ‘Queen of Leaks’ was not fair, because [the term] “leak” suggests somebody says, ‘You really ought to know this,’ hands you a piece of paper, and you have a great story. What makes me able to do this? I think deep suspicion is the answer. When something just seems off and you start poking around. Sometimes you poke around and get nowhere….That happened the first time on the Anita Hill story. I didn’t have her name — I just had the idea that somebody made a complaint about then Judge Thomas. On the day when they were voting him out of committee, Joe Biden said something about how he wasn’t going to let any nefarious information come in. I thought, ‘What is this nefarious information?’ I started kicking tires, and they started exploding in my face. What has always been amazing to me is that I subsequently learned that probably a hundred people on the Democratic side among the special interest groups knew about Anita Hill and there hadn’t been a leak. I’m not sure that would be true today.

When does the quest for a scoop cross the line?
The question of crossing the line is a gastronomical one. If it makes you queasy, you shouldn’t do it. Sometimes you have stories where when all is said and done, all you’d do is ruin somebody.

How do you approach the issue of objectivity?
Nobody is purely objective. What you can be is fair…There are many times when I read Supreme Court briefs…and when I’m done, I’ve changed my mind. Of course, what I think the outcome should be is really pretty irrelevant. The whole idea of the enterprise is to make people think. To be a little torn. Most cases are not slam-dunks — so you want people to think about the repercussions if you do X, and what the roll out has been on this issue for 100 years, and what will change if you go off course.