The U.S. Military in a Dangerous World: How Much is Enough 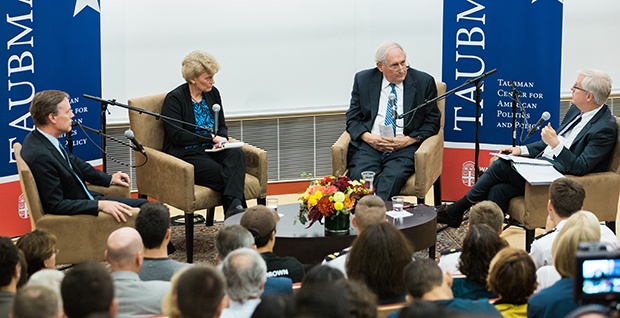 The Taubman Center for American Politics and Policy recently brought together three experts to discuss current U.S. defense strategy. “The U.S. Military in a Dangerous World: How Much is Enough?” The September 2015 panel featured:

Covering topics ranging from how to handle ISIS to the recently ratified Iran nuclear deal, the forum drew a sell-out crowd to Friedman auditorium, including ROTC students from Yale and Holy Cross, as well as faculty and students from West Point Military Academy. Here are excerpts from the Q&A guided by Robbins.

On a scale of one to ten, how anxious ought we all to be with our reliance on Europe should a conflict escalate?

Nicholas Burns: “Before Putin's invasion of Crimea and this division of Ukraine, I would have said I'm at an eight or nine about Europe's ability to uphold its responsibilities of the NATO alliance. It's been 14 months since Putin did those things, and we have seen a dramatic change in the ability of European politicians to say ‘we need to spend more on our national defense.’”

The U.S. also has other allies to rely on outside of NATO, said Burns.
“We have our alliance system in Asia, and South Korea and Australia are treaty allies. The Philippines and Thailand are security partners, and increasingly India and Vietnam and Malaysia and Singapore are security partners. So we have an enormous advantage... We should think about building these alliances and trying to sustain them so that we can work with other countries.”

A year ago or so, the administration referred to ISIS as "JV," or junior varsity. General Petraeus has called our performance against ISIS "inadequate." Should Americans be confident that when it comes to fighting ISIS we know what we're doing?

Carl Levin: “Confident in will, yes. Determination, yes. Confident in the mechanism that will work in that part of the world, no. It used to be that the enemy of your enemy is your friend — that's no longer true. The enemy of our enemy — ISIS — is in many cases our enemy. The bottom line is that I think we should have been more aggressive in terms of training and equipping the Syrian opposition. We should have been more aggressive, I believe, in terms of a safe zone, a no-fly zone.”

However, Levin said, there is still no guarantee that had the United States done those things there would have been a different outcome.
“I believe over time that the people of that region who hate ISIS, which is 90 percent of the people in that region, will see that it’s in their interest to give up their lives if necessary to rid their countries of this cancer.”

Can you locate a current American plan that seems militarily promising for dealing with ISIS?

Paula Thornhill: “I don’t share the Senator's confidence. I don’t see evidence that we do know what we're trying to do against ISIS. The moves that I see, they tend to be between six months and 18 months lagging.”

Thornhill identified two major objectives: keeping fighters from expanding west or overseas, and dismantling the terrorist networks within the region.
“I haven't seen an articulated plan or strategy for either of those. If you don't know what your strategic objectives are, I can almost guarantee you you're not going to beat them. I'm also not convinced...[that] this is fundamentally a military problem.”

Burns: “I look at the situation in Syria, and the Middle East in general, and say it is currently [President Obama’s] weakest area... I don't think the administration is pulling together anything close to a strategy to defeat ISIS. The rhetoric is to defeat ISIS, but the policy is to contain it through air [support]. I wouldn’t support tens of thousands of American troops being put in Syria.”

Burns agreed that the issue of Syria is more a question of diplomacy than military force.
“We bring countries together. We help to point a coalition in the right direction. We could mobilize Turkey and Saudi Arabia and the United Arab Emirates and Kuwait and the Iraqi government and Syrian rebel groups. I'm in the Senator's camp. We should have been much more aggressive in arming them. That's the role we can play. But all those countries are supporting different competing rebel groups in Syria, so ISIS has been able to grow because there's no preponderance of force on the ground against it.”

Levin: “We have to be willing to use whatever it takes should they break out of the deal and move towards a nuclear weapon. One of the reasons I favored the deal was because we will be in a much stronger position militarily, should military force be needed... because we participated in a worldwide group that expressed determination to keep Iran from getting to a nuclear weapon.”

Thornhill: “From a military perspective, in terms of operational plans, we’re not ready. One of the things we’d need to think through is what that world [might] look like 15 years from now, and what you're asking U.S. military to do. But I go back to: This is not fundamentally a military issue, and if we approach it as a fundamentally military issue, then arguably we're starting at the wrong point.”

Burns: “I see it as a balance of risks and benefits... As we implement the nuclear deal, we've got a major problem. Iran has become, in a way, the most powerful and aggressive state in the Middle East. [First,] we ought to be arming the gulf areas. Secondly, we need to make up with Israel. Why not expedite a U.S.-Israel security assistance agreement? Why not ensure Israel is a qualitative military engine?