Congressman Elijah Cummings's March 8 Krieger Lecture: We need to see each other to move forward 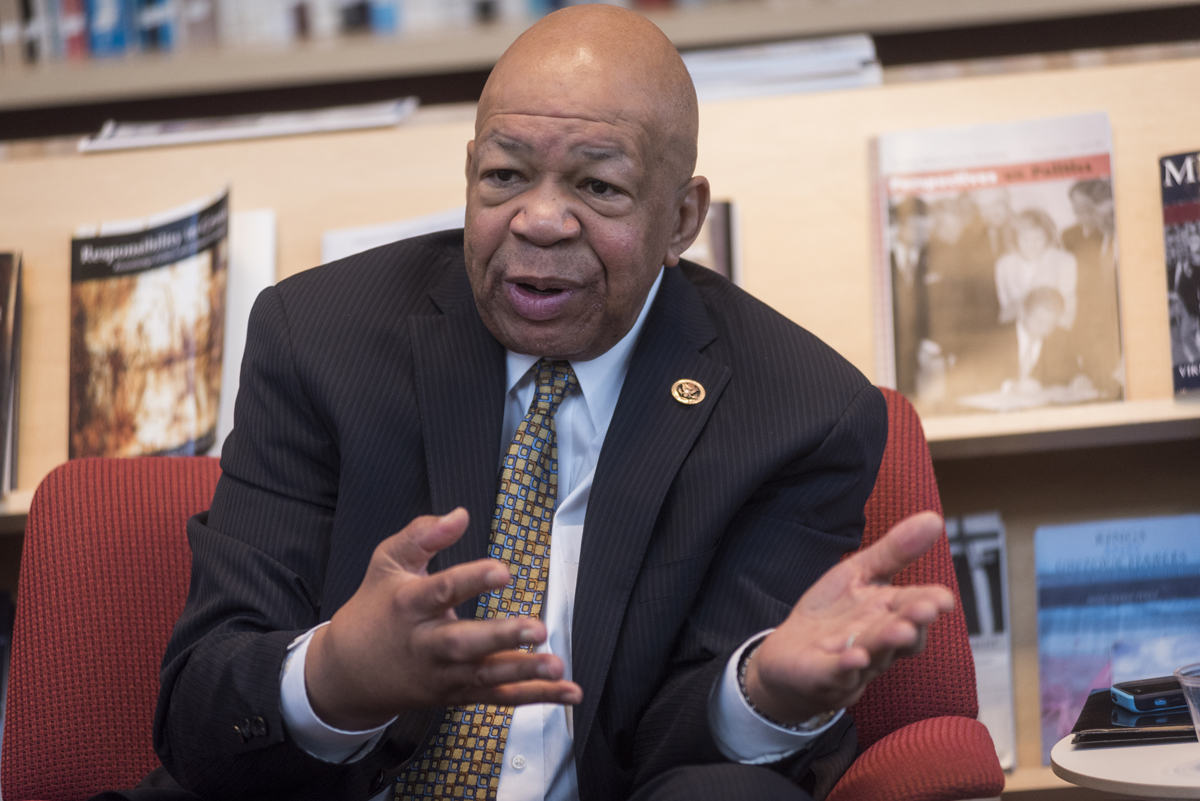 In his first-ever trip to the state of Rhode Island, Congressman Elijah Cummings delivered the Noah Krieger ’93 Memorial Lecture to a packed MacMillan auditorium on March 8. In his rousing speech, titled “The Fierce Urgency of now,” Cummings spoke of “battling for the people left behind” in society. He repeatedly asked the audience, “Do they see us? Do they really care about us?”

Cummings has dedicated his political career to serving and empowering residents in the Seventh District in Maryland, which encompasses just over half of Baltimore City, most of the majority African American sections of Baltimore County, and the majority of Howard County, Maryland. Cummings is the Democratic ranking member of the House Oversight and Government Reform and Benghazi Committees.

In a passionate speech filled with personal anecdotes, and touches of humor, anger, and criticism, Cummings urged the audience on the need for compassion, integrity, and for “speaking out” in order to ensure a better future. The heart of his message was his insight, borne of years of working with people in all facets of society — from the street corners of Baltimore’s blighted inner city to the privileged halls of power in Washington DC — is that the way to bridge differences is to truly see and listen to those with whom we disagree.

From adversity to advocacy

Cummings spoke of himself as a young boy with a learning disability. Told he would never read or write, he spent six years in a special education class. Raised by two sharecropper parents with third-grade educations, Cummings faced numerous adversities. “My father didn’t even know what special ed was,” he said. “He just thought I was special.” A school counselor advised a young Elijah that his career dream – to become a lawyer – was beyond his reach. Luckily, young Elijah’s mother insisted that counselor was wrong. Cummings, a Phi Beta Kappa graduate of Howard University, graduate of the University of Maryland Law School, and recipient of 11 honorary degrees, went on to a career in law and has served in the US House of Representatives since 1996.

The appeal of Sanders and Trump

There are people all over the nation who feel that “nobody cares about them,” said Cummings. Donald Trump and Bernie Sanders have capitalized on these sentiments to attract voters, “appealing to people who are crying out,” he said.

However, he argued that one of the biggest problems facing government today is extreme partisanship. “I know there are people sitting here who say this president hasn’t accomplished everything you’ve wanted him to accomplish,” he said, “but he had maximum opposition. I’m tired of people saying he’s a divider, that he doesn’t bring people together. It’s kind of hard to bring people together when they’re trying to destroy you.”

Cummings emphasized the importance of representative government, and how the only way to bring change is to speak out. “When people are trying to cut off the ability of other people to vote and cut off the effectiveness of their vote and their voice, such that for example the president cannot nominate someone to the Supreme Court to the United States, there’s something wrong with that picture. We all have to speak out.”

“We have got to be the agents of change. We no longer have the right to remain silent… there’s power, and it all begins with one person.”

Cummings also drew connections to his own life and that of Freddie Gray, a 25-year-old black man killed while being held in police custody last spring. Asked to speak at Gray’s funeral, Cummings stood before 41 cameras from all over the world last year, and asked, “You see him today. Did you see him when he lived?”

“I am here today to tell you there were folks who did not see Freddie Gray, but there’s many people in this society today who don’t see each other, and we live right next door to each other,” he echoed from his speech at Gray’s funeral.

“I think about Freddie Gray every day because I see what happens in the Congress of the United States of America — we have so many members who have become disconnected [from] their constituents,” Cummings said. Furthermore, elected officials often refuse to hold town hall or other interactive events because “they are afraid people will ask the right questions,” he said.

Looking to the future

“Do what you have a passion about, what feeds your soul, but be prepared for bad things to happen,” he said. “And don’t ask why did it happen to me — ask, why did it happen for me? By having these lectures, you lift up young people, so that we can truly go into the future telling folks that we can make them stronger, bolder, braver.”