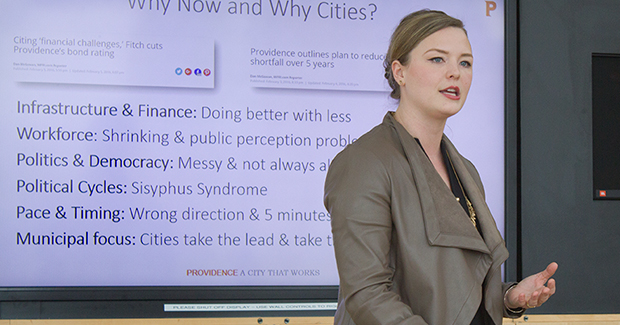 Nicole Pollock ’08 (environmental studies), Chief Innovation Officer for the City of Providence, recently spoke at the Watson Institute for International and Public Affairs about her role in enacting meaningful change in the public sector. Pollock was appointed by Mayor Jorge Elorza in January 2015, and as part of the Mayor’s senior staff, works towards streamlining areas of efficiency and services in Providence government and public policy. In the event sponsored by Taubman Center for American Politics and Policy, Pollock shed light on the importance of a long-term civic vision, using what has worked in other cities, and constantly striving to move forward.

On fueling innovation through civic vision

Pollock asked the audience why Apple dominates the technology market. “It’s not because they have the best products,” she said. “They communicate better than anyone else. They talk about vision.” She argued Providence needs to do the same — focusing on a vision that “we can do better, and we can be happier doing better.”

Providence needs to address its crumbling schools, poverty rate, structural unemployment, and income inequality rate, she said, but the key is to have the support and tools to get there. That’s where Pollock comes in. “There’s a hunger for better civic engagement,” Pollock said, emphasizing that her office provides the structure for innovative projects to evolve — benchmarking new policy programs, measuring the effectiveness of the city’s programs, and helping decide which projects to pursue.

One such project includes the development of 19 acres of land along Interstate I-95, of which 40 percent will be green space. “It’s a huge tract of land in a historic city,” Pollock said. “It’s a once-in-a-century opportunity. There’s no other city that has this kind of space. It’s going to bring a lot of opportunity for our higher education institutions, and bring new thinking and new demands about what government does — how it partners with companies and educational institutions to do big things in the city.” She called it an alignment of infrastructure, urban planning, thought leadership, and political leadership.

On barriers to public service innovation

Pollock argued that in addition to Providence’s crumbling infrastructure, its public workforce is struggling to get things done. “It’s a bad case of Sisyphus Syndrome,” Pollock contended, explaining how public workers feel like they are starting from scratch every time a new mayor or governor takes office. Pollock attributes this to the two-term limits in Providence, arguing that visions have become too short-sighted for any long-term change to be successfully enacted. “The longest vision you’re getting is eight years,” she said. She used the example of Charleston, South Carolina as an example of a city that has benefitted from a long-term strategy led by a highly skilled mayor who has served ten terms over 40 years. “They’ve been a beacon of light in urban planning,” she said.

Another issue is that a lot of people in government “don’t know how to do innovative generative work.” Invoking the American entrepreneur Peter Thiel, she argued that the real challenge was not going forwards, but “coming up with an idea and creating a prototype for it or a service related to the idea.”

On striving for improvement, not perfection

Ultimately, Pollock argues that innovation comes down to strategic planning, not letting perfection get in the way of progress, and maintaining a vision. This involves making sure workers are well-trained, keeping track of metrics, and  “not letting perfect be the good of evil,” Pollock said. Moving forward, the innovation office will be overseeing the digitizing of the licensing process in Providence, system and data overhauls, numerous city events, customer service trainings, and more. A lot of this involves looking at other cities for inspiration — seeing which city is excelling in a certain area, and modeling off good examples in gender equality, structural planning, and municipal innovation.