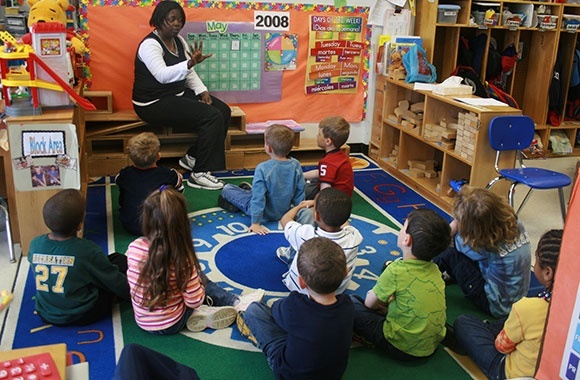 The briefing was inspired by post-Coleman research outcomes reported in the November 2017 volume of The ANNALS, which Moffitt and Jackson co-edited, after they convened a “Coleman at 50” workshop at the Watson Institute.

More than 50 years after its 1966 issuance, the Equality of Educational Opportunity study, more commonly called the Coleman Report, continues to fascinate scholars and researchers across diverse fields of education, law, political science, public policy and sociology, including Susan Moffitt, director of the Taubman Center for American Politics and Policy, and an associate professor of political science at the Watson Institute, and Margot Jackson, an associate professor of sociology at Brown University.

On March 22, Moffitt, along with scholars from the University of California (Berkeley), Harvard University and Stanford University, participated in a panel discussion in Washington D.C., “In the Age of Inequality, Does Public Schooling Make a Difference?” A collaboration between the American Academy of Political and Social Science and the American Educational Research Association, the briefing was open to all congressional staff members. More than 100 staffers, researchers and media representatives attended.

This event was inspired by post-Coleman research outcomes reported in the November 2017 volume of The ANNALS, a widely respected journal of the American Academy and Social Science, which Moffitt and Jackson co-edited, after they convened a “Coleman at 50” workshop at Brown University’s Watson Institute. Researchers at the Congressional briefing discussed inequality and educational opportunity, how schools impact the lives of underserved youth and the relationship between research and public policy.

Identifying the massive inequality in public school educated children’s academic achievements, the Coleman Report, says Jackson, “had a significant impact on policy conversations and policy making.” By putting these issues into public discourse, the Coleman Report, which was commissioned by the federal government, launched really important and fruitful conversations about how we study inequality, adds Moffitt.

At the March briefing, Moffitt identified several evidence-based initiatives that have improved children’s educational attainments, including:

• Early investments in children who are too young for elementary school, such as public preschools, child tax programs, nurse-family partnerships and, as Jackson’s research has demonstrated, WIC;

• Support parents with technology, such as the texting program that Susanna Loeb (Brown’s incoming head of the Annenberg Institute) and her colleagues developed that led to higher early literary assessment scores for participating children; and

Too, with so many critical issues occupying the public’s attention, seeing so many people interested in inequality is a positive signal. “Even if we don’t see new legislation next week or next year, keeping the inequality conversation front and center … is important in Washington, D.C., and at state and local [venues], where so much happens,” says Moffitt, whose research informs the broader discourse. “We’re less likely to have an impact when we just talk amongst ourselves… it’s vital to get our ideas out [to varied audiences].”

Jackson sees a growing awareness of and interest in income inequality, which she calls a fortunate byproduct of the unfortunate reality of the ever-expanding economic schism. Although researchers are increasingly focusing on studying inequality at local and state levels – rather than nationally – there are tremendous variations in education funding across and within states. “It’s a real issue that some states have more money [for education] than others, [especially since] only 10 percent of funding for education (pre-K through 12th grade) comes from the federal government,” says Jackson.

With “Coleman at 50” behind us, what does the future hold, given this current political climate?

“We [must] continue to press forward … on as many fronts as we can,” says Moffitt. “The urgency and importance of continued effort and investment are clear; even if I am not hopeful, I am resolute.”

“It’s an exciting time for research… there’s an unprecedented amount of public sector data that is available in a way it wasn’t before; we now have the capacity to use it,” says Jackson. “We have access to information that wasn’t available [during the Coleman Report-era].” Results from large-scale data nicely complement large surveys, she adds. “Policy makers like it; it’s hard for the federal government to ignore findings from Medicaid data, for example.”