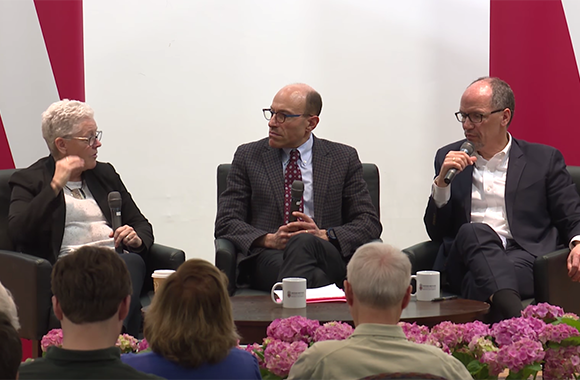 The Watson Institute hosted more than 300 events during the 2017-2018 academic year, ranging from topical policy-relevant lectures and events to scholarly conferences. Below are some of the most notable among them.

Puerto Rican Resilience and Resistance in the Aftermath of Hurricane Maria
A teach-in focusing on Puerto Rican grassroots recovery efforts and activism that has held communities together in the aftermath of Hurricane Maria. This event featured Arturo Massol, associate director of Casa Pueblo; Andrew Colarusso, visiting professor of Literary Arts at Brown; Shey Rivera, artistic director, AS220; and undergraduates Katerina Ramos Jordan and Coral Murphy. The teach-in was a CLACS Undergraduate Fellows initiative.

Preserving the Obama Legacy: Reflections from Former Cabinet Members
A conversation with Tom Perez '83, chair of the Democratic National Committee and former Secretary of Labor, and Gina McCarthy, former administrator for the United States Environmental Protection Agency, on the dismantling of Obama administration policies. This event was co-sponsored by Watson’s Politics in Action and the Distinguished Speaker series.

Threats to Democracy
Congressman Adam Schiff delivered the Taubman Center’s Governor Frank Licht '38 Lecture. Representing California's 28th Congressional District, Congressman Schiff is in his 9th term in the House of Representatives and serves on the House Permanent Select Committee on Intelligence and the Benghazi Select Committee. The event was co-sponsored by Watson’s Politics in Action series and by the Taubman Center for American Politics and Policy.

Hack for Humanity: Brown University’s First Annual Humanitarian Hackathon
The inaugural Humanitarian Hackathon brought together students from across Rhode Island to learn about the most pressing needs in the humanitarian sphere. Participants generated creative ideas for programs or technologies that could help improve the lives of disaster and conflict-affected communities around the world, such as the ongoing Rohingya Refugee Crisis. Sponsored by the Humanitarian Innovation Initiative.

Ethnographic Explorations in the Global South through Music
Members of the multiple Grammy-winning rock/funk band Living Colour discussed traveling across the Global South, percussion as a means of bridging cultures as a tool for conflict resolution, and research on the cultures and music of the African diaspora in Brazil and across the Caribbean. The event, part of Watson’s Arts and Culture series and the Development and Governance Seminar, was co-sponsored by the Graduate Program in Development and the Presidential Scholars Program.

Police, Violence and Legitimacy: From Baltimore to Tel-Aviv
In this talk, Guy Ben-Porat, an associate professor at the Department of Politics and Government at Ben-Gurion University (Israel) and a senior fellow at the Watson Institute, discussed his work analyzing police and minority groups in Israel, as well as questions of citizenship, belonging and legitimacy. Sponsored by Middle East Studies.

From Baghdad to Paris: Tales from a New York Times Foreign Correspondent
Alissa Rubin '80, Pulitzer Prize-winning reporter and Paris Bureau Chief for the New York Times, discussed the American image abroad, the impact on peace and war, and the changing role of journalism today. This event was part of Watson’s Byline and Distinguished Speaker series and co-sponsored Brown Political Review.

Unhealthy Politics: The Battle over Evidence-Based Medicine
In this panel discussion, Eric Patashnik, director of Brown’s MPA Program and author of Unhealthy Politics, offered vital insights into health policy and the limits of science, expertise, and professionalism as political foundations for pragmatic problem-solving in American democracy. The event, hosted by the Taubman Center, was co-sponsored by Watson’s Meet the Author series.

North Korea’s Nuclear Program: The What, How, When and Why
Internationally known expert in plutonium science, global threat reduction, and nuclear security Siegfried S. Hecker spoke on the risks of nuclear proliferation and nuclear terrorism worldwide. Hecker has made numerous visits to North Korea's Yongbyon Nuclear Scientific Research Center to assess its nuclear program. Sponsored by the Chong Wook Lee and Vartan Gregorian Distinguished Lecture series.

The Role of Public Service in Turbulent Times
Preet Bharara, who served as U.S. Attorney for the Southern District of New York from 2009 to 2017, is now a Distinguished Scholar in Residence at the NYU School of Law. He delivered this talk as part of Watson’s Politics in Action series at the invitation of the Taubman Center for American Politics and Policy.

Is the High Tide of Populism Over? The European Experience
Marco Buti, director general for Economic and Financial Affairs at the European Commission, gave this talk as part of Watson’s Politics in Action and Political Economy and Labor Seminar series. The talk was moderated by Mark Blyth, professor of political science and international and public affairs.

Investing in Women's Rights to Promote National Security
In this panel discussion, Jennifer Klein ’87, visiting fellow at Yale’s Center for Global Legal Challenges, explained why advancing rights and opportunities for women and girls around the world is both the right and the smart thing to do. She was joined by political scientists Rose McDermott and Susan Moffitt, director of the Taubman Center for American Politics and Policy. The talk was part of Watson’s War or Peace series.

The Future of Europe in the Wake of Brexit
Romano Prodi, former prime minister of Italy and former president of the European Commission, is also an adjunct professor of international and public affairs at the Watson Institute. He gave this talk as part of Watson’s Politics in Action and the Distinguished Speaker series.

A Conversation with Governor Gina Raimondo
Rhode Island Governor Gina Raimondo was joined by Ambassador Cathy Russell, U.S. Ambassador-at-Large for Global Women’s Issues under President Obama, for a discussion of politics, policy, and leadership. The event was co-sponsored by Watson’s Politics in Action and the Distinguished Speaker series.

Donald Trump, the Free Press and the Future of American Democracy
Jeffrey Goldberg, editor in chief of The Atlantic and visiting distinguished fellow at the Carnegie Endowment for International Peace, was joined by Edward Steinfeld, director of the Watson Institute, for this Q&A. The event was part of Watson’s Byline series.