RBG is Gone: What Now? 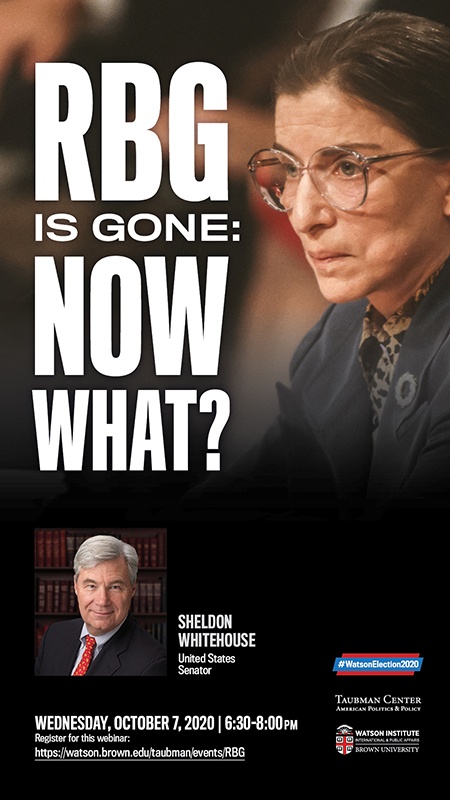 Ruth Bader Ginsburg was one of the most important and influential justices in the Supreme Court’s history. Among other issues, she was a giant in the protection of the rights of women and minorities. Her death is now not only a profound loss for all Americans whether they agreed with her views or not, but the nomination of her successor moves center stage in the presidential and congressional elections just weeks away.

Senator Sheldon Whitehouse (D-RI), a highly respected member of the Senate Judiciary Committee will join Taubman Center Interim Director, Professor Richard Arenberg in a conversation about Justice Ginsburg’s legacy, the U.S. Senate and the courts. How will the Senate respond to the president’s nominee? What role are special interests playing behind the scenes of the nomination process? What are the issues at stake going forward? How will a new Democratic majority, if one is elected in November, address the make-up of the courts and the state of the confirmation process?

Sheldon Whitehouse has earned a reputation in the Senate as a fierce advocate for progressive values and a thoughtful legislator capable of reaching across the aisle to achieve bipartisan solutions. Senator Whitehouse has been at the center of bipartisan efforts to pass laws overhauling federal education policy, rebuilding our nation’s infrastructure, reforming the criminal and juvenile justice systems, protecting Americans from toxic chemicals in everyday products, and addressing ocean plastic waste.

Recognizing the devastating toll of addiction in Rhode Island and across the nation, Whitehouse authored the first significant bipartisan law to address the opioid crisis, the Comprehensive Addiction and Recovery Act.

Representing the Ocean State, Whitehouse plays a key role in crafting policies addressing climate change, environmental protection, and a price on carbon. He passed into law a dedicated fund to support ocean and coastal research and restoration and bipartisan legislation to confront the crisis of marine plastic and other waste polluting our oceans. He has worked to enact bipartisan measures to reduce carbon pollution and boost America’s clean energy economy.

Whitehouse has stood as a staunch defender of Social Security and Medicare, and has made improving care and reducing costs in our health care system a hallmark of his career. To counteract the corrosive effects of special interests in our democracy, Whitehouse has championed efforts to root out dark money from our elections and make Congress and the courts accountable to the American people. "While fighting in Washington against corporate interests and their influence on the political process," wrote the Providence Journal, "Senator Whitehouse has not forgotten the people back home."

A graduate of Yale University and the University of Virginia School of Law, Sheldon served as Rhode Island’s U.S. Attorney and state attorney general before being elected to the Senate, where he serves on the Finance Committee, the Judiciary Committee, the Environment and Public Works Committee, and the Budget Committee.

He and his wife Sandra, a marine biologist and environmental advocate, live in Newport. They have two grown children.